Economists had forecast March consumer confidence levels to climb to 82. Instead of celebrating a barely there increase, economists are waxing eloquence on the two-percent decline and two-point gulf between expectations and reality.

In spite of living in North America and having to deal with the cold winter weather that affects most of us, analysts still expected consumer confidence to improve in March…and they seem surprised that it didn’t.

Analysts basically think consumers are too depressed by the weather to shop. This would, of course, bolster their opinion that the U.S. economy is only temporarily stuck and sunnier skies will prevail.

Maybe the weather can’t take all the blame. In spite of the winter storms, the average U.S. temperature for January was normal, with the warmer West Coast weather offsetting the cooler East Coast weather. The average was 30.3 degrees Fahrenheit, which is only 1/10 of a degree below normal for the month. Things weren’t much different in February and consumer confidence levels actually increased to 81.2 from a projected 80.6. (Source: “National US temperature for January normal despite winter storms,” The Guardian, February 13, 2014.)

I think the depressed consumer confidence levels are more connected to weak economic indicators and tensions along the Ukraine/Russia border.

Even though the U.S. unemployment rate has improved over the last year—currently sitting at 6.7%—it comes as a result of an increase in low-wage-paying, part-time retail jobs. The underemployment rate is still sitting near 13% and the long-term unemployed rate is at 2.3%. 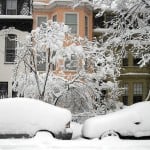 Retail sales, which account for about 30% of consumer spending, rose 0.2% in February after two straight months of declines and a 0.4% drop in January. Retail sales are expected to increase in April and May as warmer temperatures roll in. (Source: “U.S. retail sales rise a bit more then expected in February,” Reuters, March 13, 2014.)

But with a rough jobs market and stagnant wages, it’s tough to see how sunny skies will translate into strong retail sales. That is, unless Americans do so at the expense of falling further into debt—but that’s not real economic growth. As a result, it’s not a real surprise to see consumer confidence levels on the decline.

Where does that leave investors? Whether it’s cold or hot outside, there are two things Americans can’t do without—utilities and consumer staples. The best way to decrease risk and diversify your holdings in either sector is through exchange-traded funds (ETFs) like Utilities Select Sector SPDRA (NYSEArca/XLU) and the Vanguard Consumer Staples ETF (NYSEArca/VDC).

This article How to Profit from the Two Things Consumers Can’t Do Without by John Paul Whitefoot, BA was originally published at Daily Gains Letter.