Updated: HSBC shut its flagship branch in the City of London today in the face of protests against its investment in fossil fuels claims the World Development Movement but HSBC says it was business as usual*. HSBC is the UK’s largest underwriter of fossil fuels bonds and shares says the WDM.

The protestors from the World Development Movement dressed as coal miners and cordoned off the area outside the bank using ‘climate crime scene’ hazard tape and eviction notices.

The protest took place to kick-start a global month of action against dirty energy. During the next four weeks there will be protests throughout the City of London and across the country targeting HSBC and other financial institutions for their financing of fossil fuels.

“We set up an extraction zone outside HSBC to bring the reality of what the banks are financing back to the City. By pouring billions of pounds worth of finance into fossil fuels each year, HSBC is destroying people’s homes, lives and the climate. For example, HSBC is financing companies mining coal in Indonesia, which are pushing people off their land and polluting their water. HSBC must stop this reckless investment.”

The activists also attempted to hand in a giant cheque for seven pence, to represent the amount of compensation people in Indonesian Borneo have been offered for land taken for coal mining by BHP Billiton, which has raised over £1.8 billion since 2009 from bonds underwritten by HSBC. 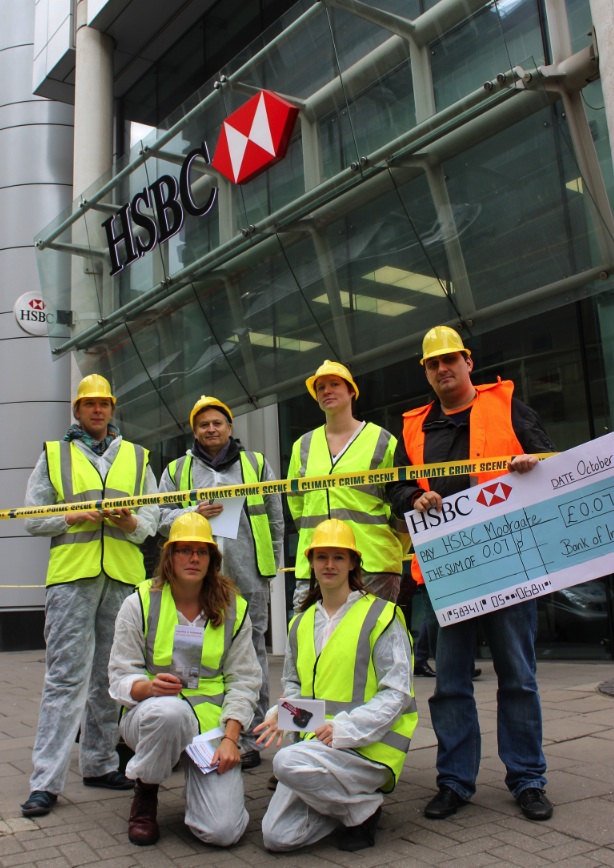 *Story updated to reflect HSBC saying that '…the branch remained open for business all day, and did not close'.

'Trickle-Down' does not work says PositiveMoney