"We have taken a close look this quarter at four key export markets. We've seen huge increases in searches from all of the most important. There was a massive 231 per cent rise in German smartphone searches for UK brands and a 78 per cent surge in French tablet searches for UK retailers. These positive results were supported by big increases from the other key markets, the Netherlands and the United States. We also saw large increases in searches for department stores, 78 per cent up on smartphones and 46 per cent up on tablets, demonstrating the strength of these UK retailers.

"There were also very positive results from the Russian Federation and Argentina. We will be working hard to make sure that these good trends are not undermined by proposals in these countries for import taxes targeted against cross-border internet sales."

Peter Fitzgerald, Retail Director, Google, said: "This Christmas mobile truly came into its own. Those retailers who invested in cross-device experiences – allowing their customers to easily find, buy and discover no matter where they are -reaped the rewards.

"Export continued to be a key driver of growth for our retailers this Christmas, particularly for our clothing and beauty brands. Phenomenal smartphone growth was seen across both emerging and established markets, with 231% growth in smartphone searches from Germany over Q4.

"Finally gadgets continued to be the gift of choice this year, with consoles, tablets & games leading the charge. On smartphones, wedding related searches trended."

• Germany, the Russian Federation and Argentina have seen the most substantial growth rates in smartphone search volumes at 231%, 145% and 137% respectively, for UK retail searches.

• A number of countries demonstrated considerable rates of growth in tablet searches including Germany (130%), France (78%), Russian Federation (66%), Ireland (56%) and the Netherlands (47%).

• The number of UK consumers searching on smartphones for overseas retailers rose 28% year-on-year ending Q4 2013, while on tablets this figure grow by 43%.

• All sectors experienced an increase in the volume of overseas customers searching for UK retailers on both smartphones and tablets.

• Department stores witnessed the largest increases in searches by smartphones, with a 78% increase followed by Apparel (66%) and Beauty (56%).

• Beauty was the most searched sector by overseas customers on tablets, experiencing an increase of (51%), followed by Department Stores at (46%) and Apparel (41%). 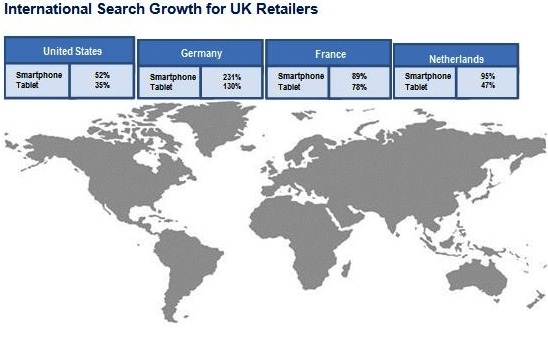 There’s a new quid on the block: the new £1 coin is here!