Major cities across the U.S. economy are struggling. Yes, we saw great cities like Detroit go bankrupt. But don’t for a second believe it’s all over. The reality is we will have more situations like Detroit.

But Los Angeles isn’t the only problem city in California. When I look at San Francisco, it shows even more trouble for the municipal bonds market. The city’s controller says the budget deficit will increase from $283 million last year to $829 million by fiscal 2015/2016. (Source: City of San Francisco, Office of the Controller web site, last accessed September 16, 2013.)

Minneapolis, Minnesota was downgraded by Moody’s Investors Service recently. This puts the city’s $679 million worth of general obligation municipal bonds on the line. (Source: Moody’s Investors Service, July 29, 2013.) A couple of the reasons for the downgrade by Moody’s were that property values in the city have declined and it has a pension liability of 4.3 times the operating revenue it received in fiscal 2012!

Risks are growing in the municipal bonds market. Let’s not forget: in Detroit, over 100,000 municipal bond investors were told, “Sorry, we can’t pay you.”

What we are seeing with U.S. cities sinking in debt should alarm us, but just like other crisis situations, like auto loans and student debt, no one wants to talk about it.

Municipal bonds continue to be issued at a rapid pace; in the second quarter of 2013, 8.9% more municipal bonds were issued than in the previous quarter. California, where we have been seeing a significant number of municipalities posting budget deficits, raised $13.6 billion worth of bonds in the second quarter. (Source: “Municipal Bond Credit Report,” Securities Industry and Financial Markets Association web site, last accessed September 16, 2013.)

To say the very least, the sentiment at the conference was dismal, and the “hope factor” just wasn’t there. After attending this annual conference for a few years, you tend to get an idea about what you will see and what kinds of opinions you will hear. This time was different. Attendance was way down, as were the number of gold companies exhibiting.

Those who pitched gold explorers, and gave their tips, were saying, “But you have to be really careful.” The “feeling” was gold bullion producing companies, be they senior miners or junior miners, face an anemic future ahead. And for those companies that explore for the precious metal, the “feeling” was that they will have trouble raising money. 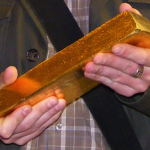 It was unusual to see the regular gold bugs actually being cautious on where the gold prices are going next. They were very clear that the damage that took place in the most recent sell-off would take some time to recover. They were concerned the price of gold bullion is being manipulated.

To me, all of this is negative sentiment—something I haven’t seen in years—is a bullish signal for gold prices. Attending the conference reminds me of what the “buy when there’s blood on the street” saying actually means.

Yes, it’s a time of elevated pessimism for gold bullion. Can it get worse? After all, we are hearing once again how The Goldman Sachs Group, Inc. (NYSE/GS) is calling for lower gold bullion prices ahead—even saying it could fall below $1,000 an ounce.

When I look at gold prices, I don’t look at daily fluctuations; I look at the big picture. When I do just that, I see the precious metal is still trending higher, as you can see in the chart below. 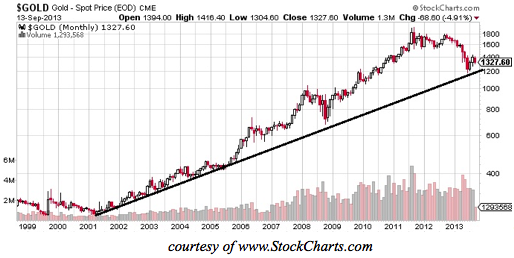 I remain bullish on gold bullion. I’m very interested to see if Goldman’s recent “sell recommendation” on gold pushes the metal’s price down again. And I like all the growing negativity surrounding gold bullion. Are we getting to the point we were at in 2001, when bearishness for gold bullion reigned? To me, these are all bullish signs.

“I see a deal when it’s a deal. And right now there’s a good ‘for sale’ sign flashing on gold bullion and gold producer shares. In fact, after peaking at the $690 an ounce level earlier this year, gold could be a bargain at its current price of around $650 per ounce. As a reader, you are undoubtedly aware of my negative stance on the general stock market and the U.S. economy. As the economic problems that continue to brew in the U.S., as these problems develop into others, and as they are finally exposed, what other investment but gold will worldwide investors turn to?” Michael Lombardi in Profit Confidential, March 14, 2007. Gold bullion was trading under $300.00 an ounce when Michael first started recommending gold-related investments. Many gold stocks recommended in Michael’s advisories gained in excess of 100%.

Traders get the jitters after interest rate cuts