Not only has Hurricane Sandy forced the crew of the tall ship HMS Bounty to abandon her, it is also threatening the integrity of the Internet.

Two members of the sixteen crew of the tall ship replica of HMS Bounty are still missing after they were forced to abandon ship in the face of the powerful Hurricane Sandy off the coast of North Carolina. The two missing crew members are equipped with safety suits but it is assumed that the vessel itself has succumbed to the storm and sunk. Please spare a prayer for the two missing crew members.

The Hurricane has also all but shut down much of the US, even New York – the city that never sleeps, as 100 mph winds and an 11 foot high wall of water race towards the city.

There is also the fear that the Hurricane might bring down the Internet reports the Express. There are hugely important data centres right in the path of the storm.

“Massive companies like Google, Apple and Amazon host their servers in specialist 'farms' – at least six of which are based in areas right in the path of the 'Frankenstorm'.”

Mashable.com’s Neha Prakash is quoted in the article as saying how important these companies and their servers are to the Internet as a whole, with Amazon’s cloud services ‘powering at least one percent of the entire Internet’.

This storm could do more damage than a whole army of hackers armed with Stuxnet computer worms. It looks like Mother Nature is flexing her muscles and reminding us all where the real power lies. 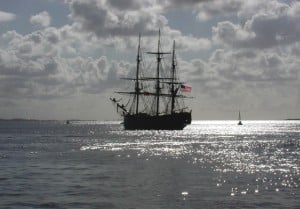