The cuts are aimed at reducing the heavyÂ annual Disability LivingÂ AllowanceÂ tax bill by more than Â£2.24 billion a year in these times of austerity where every penny spent has to be justified.

Also the rate of increase in those claiming Disability LivingÂ Allowance has risen by 30% over the past couple of years so the tax burden cannot be allowed to extend any further can it?

Yes it can and why have we developed a national fixation with benefits cheats defrauding the system for what is comparativelyÂ small fry when compared to potential tax revenue that isÂ deliberatelyÂ being overlooked by governments in order to attract the super rich and investment banks and foreign businesses to British shores.

Add this to the top 1,000 richest persons in the UK whose combined wealth increased by Â£155 billion in the past three years and you have an idea of the numbers we areÂ talkingÂ about here.

So what if a fraction of those who are claiming Disability Living Allowance are fraudulent? It is to be expected and priced in by any decent society in order to ensure that the vulnerable areÂ ring-fenced.

Many people are possibly making fraudulentÂ claims because of the economic situation and thanks to a benefits system that is lacking in support in other areas.

The 'get of your backside and work you lazyÂ sponger' is not applicable for many people who cannot find work, and cannot set up their own business or support their families.

If the options to provide for your family are, face extreme poverty or risk the weight of the law by making aÂ fraudulentÂ claim, then any decent man or woman would risk all in order to provide for their family…..especially when they are witnessing the political and financial elite get away with fraud on a daily basis.

David Cameron promised to end corruption yet he and his government are up to their necks in it, just look at Cameron's own links with News International.

And how exactly is the unemployed,Â aspiringÂ entrepreneur supposed to get their small local business off the ground when banks are not lending?

And how can a small business compete with supermarkets who are extracting the wealth from towns and cities acrossÂ theÂ country with their diminished tax offering compared to the tax take from numerousÂ successfulÂ small businesses?

Targeting those on disability benefits is not going to solve our economic crisis. Then when one considers the already traumatic tests that many disabled and sick people have to go through in order to claim what is rightfully theirs you realise that is bad enough. But then to question what constitutes a person's ability to work byÂ imposing goal driven censuses (where turning down benefits gets you a bonus) we are delving into serious moral hazard.

A mere fractional taxation increase Â of just 1,000 of the country's wealthiest citizens will pay for the proposed disability cuts.

How much money do the richest people really need to amass? And how much does their combined wealth remaining in theirÂ possessionÂ benefit theÂ countryÂ at large?

'Ah, but the rich might leave the UK and tax their wealth with them' is the oldest argument against taxing the rich but I would say tax them at 50% if they try to take their wealth abroad.

Protectionism has become a dirty world in the 21st century globalist economicÂ infrastructureÂ yet I say it is essential if we in the UK are all in this together. 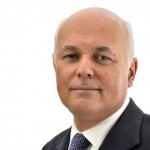 If you made tens of millions/billions in the good times in Britain then expect to join in the pain and leave the vulnerable alone inÂ thisÂ immoral proposed change to disability benefits.

Oh, by the way, many of the top 1,000 richest Brits areÂ billionaireÂ equity speculators, investment bankers andÂ hedge-fundÂ managers whose appetite for risk brought us to where we are now.

Iain Duncan Smith is clearly not a man who should be involved in the management of public funds and the Conservatives are clearly not a party who should have office…….but that goes for all of the three main political parties who are ideologically the same.

Let us not forget Tony Blair tried to cutÂ disabilityÂ benefits and got a bloody nose in return and where is the real LibDem opposition to this proposal by Duncan Smith?

One can only hope that this summer will see the British people stand up to the social injustice being waved in their faces every day by persons such as Iain Duncan Smith.

Image by Work and Pensions Office.Musical Mind20 at en.wikipedia [see page for license], from Wikimedia Commons