Police officer Simon Harwood has been found not guilty of manslaughter after he attacked Mr Ian Tomlinson in 2009's G20 protests withoutÂ provocation.

Newspaper seller, Ian Tomlinson died fromÂ severe internal bleedingÂ shortly after he was hit with a baton and thrown to the ground by Harwood.

The jury's not guilty verdict has caused uproarÂ amongst bloggers and members of the public via social media and will no doubt raise tensions further between the police and the public who feel cheated at the verdict and the Crown Prosecution ServicesÂ initialÂ reticenceÂ to prosecute Harwood because of opposing post mortem results.

The crux of the jury's verdict sits with the lack of supposed reasonable correlation between Tomlinson's death through internal bleeding and the 'nonÂ criminal' attack by Simon Harwood.

Harwood himself admitted that in hindsight his intervention was wrong and that he should not have hit Mr Tomlinson with the baton and thrown him to the ground but cited the extreme pressures placed on himself during the G20 riots and justified his actions as not being the full extent of the measures at his disposal by saying he could have used his gun!

It has since come to light that Simon Harwood has been the subject of numerous complaints against his conduct as a Police officer and questions have been raised as to whetherÂ orÂ not he should have been serving as a police officer at all following his previous violentÂ outbursts.

Video footage shows an out of control Harwood throwing a BBC camera man to the floor before his encounter with Ian Tomlinson.

The family of Ian Tomlinson have vowed to take the matter to the civil courts to find the justice not offered to them today.

The implications are that Simon Harwood could continue to work as a public servant possibly within the Police force which will mean that taxes taken from Ian Tomlinson's family and friends will go to pay for Harwood's pension.

It is folly not to support our officers but it is greater folly when they are seen by the public to beÂ aboveÂ the law when they act beyond their remit.

British justice has been done and observed regardless of whether the outcome is just….Ian Tomlinson's family most certainly do not feel the verdict of the judicial system is a just one. 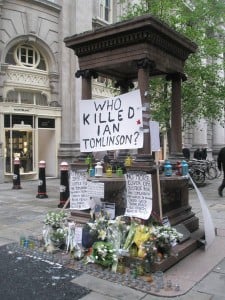