Illegal trade is still pushing the vaquita to extinction

Despite multiple commitments and increased international attention, efforts to save the world’s most endangered marine mammal are proving woefully inadequate – without urgent coordinated action from Mexico, the US and China, the extinction of the vaquita seems inevitable.

The vaquita is found only in the northern Gulf of California in Mexico. In the past five years, its population declined by 90 per cent as a result of entanglement in gillnets, many set to illegally catch the totoaba, a large and critically endangered fish that is also endemic to the Gulf of California.

EIA has carried out a series of investigations into the totoaba trade since 2015. Our September 2016 report Collateral Damage (video below) warned that the vaquita, the world’s smallest and most endangered cetacean, was doomed to extinction if substantial targeted and coordinated enforcement efforts were not immediately put in place to eliminate threats to its survival.

A report by the International Committee for the Recovery of the Vaquita (CIRVA) released yesterday (February 2) reveals that, despite significant efforts of the Mexican Government in coordination with Sea Shepherd Conservation Society, illegal fishing still continues. The vaquita stands today on the very edge of extinction: almost half those remaining were lost between 2015 and 2016, and the species is thought to number only about 30 individuals. 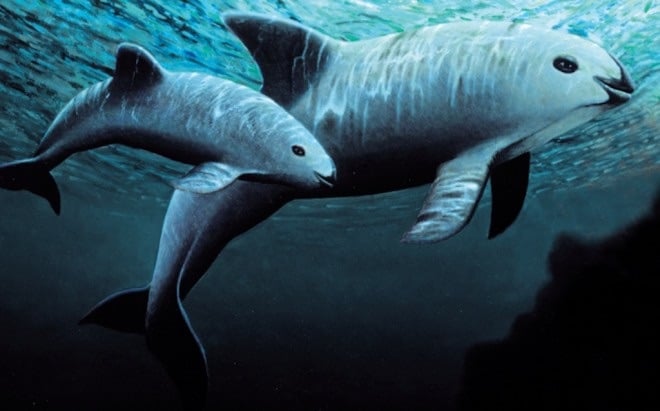 The swim bladder of the totoaba is highly sought after in China for use in traditional medicine and in 2016 EIA investigations revealed an ongoing trade in Guangdong province, China, despite such trade being illegal.

In comparison, no totoaba seizures, arrests or prosecutions have occurred in mainland China, the main market for totoaba. In December 2016, China held an enforcement training workshop which brought together agencies from mainland China, Hong Kong, Mexico and the US. Last month, China’s Fisheries Bureau, Market Regulation and Administration Office and CITES Management Authority publicly launched a month-long market inspection and education campaign in Guangzhou, targeted at illegal trade and consumption of totoaba.

While these efforts are very welcome, China has not gone far enough to effectively tackle illegal trade in totoaba. Intelligence-led operations, using information supplied by EIA and others, are required to track down the key players in these organised criminal operations. Arrests, prosecutions and convictions carrying sentences strong enough to deter repeat offenders are needed to send a strong message that no trade in totoaba will be tolerated. Enforcement operations must target all fish maw markets; reported market inspections to date have been limited to Guangzhou, despite clear evidence that the bulk of the totoaba trade is based in Shantou.

China, together with Mexico and the US, a key transit country, need to collaborate urgently to investigate and crack down on smuggling routes between the Gulf of California and China. The need for international collaboration was recognised at the CITES Conference of the Parties meeting in September 2016 where a decision was passed requiring range, transit or consumer states to conduct awareness-raising and demand reduction campaigns, and increase enforcement efforts to address the poaching and trade in totoaba.

Ultimately, the fate of the vaquita lies with Mexico – and political will from Mexico is clearly lacking. In July 2016, the White House announced the outcome of the US/Mexico bilateral meeting which, according to the  US, agreed that “Mexico will make permanent a ban on the use of gillnets in all fisheries throughout the range of the vaquita in the upper Gulf of California.” Mexico is yet to announce such a ban, leading to great concern over what happens when the current two-year ban runs out in April this year. At the same time, Mexico’s fishing authorities have been clear that they intend to continue to allow the corvina fishery, despite the fact that it is used as a cover for illegal totoaba fishing.

While the work of those involved in seizures and net-recovery is highly commendable, the lack of uniform effort across the various responsible Mexican agencies means that the country’s overall efforts to save the vaquita are woefully inadequate, with tragic consequences.

So precarious is the plight of the vaquita that plans are now underway to capture surviving animals and hold them in closely guarded ocean enclosures – a highly risky, last-ditch attempt to save the species, especially given that no live vaquita has ever been successfully captured let alone bred in captivity.

It is critical that the Mexican Government steps up efforts to impose and enforce a total ban on all fishing within the range of the vaquita, along with a ban on the sale and possession of all gillnets on land or at sea in the northern Gulf of California. This is the only way to provide the vaquita with any long-term chance of survival. Even if the planned capture is successful, the vaquita will need a safe and healthy ecosystem to return to. Moreover, the totoaba is itself a critically endangered species in urgent need of protection; the continued use and abandonment of gillnets in the Gulf threatens their continued existence and harms a range of other marine species through bycatch, including dolphins and sea turtles.

Collateral Damage from EIA on Vimeo.

As highlighted in Collateral Damage, totoaba poaching can only be stopped with the collaboration of other countries, particularly the main consumer market of China. Without eliminating the market for totoaba swim bladder, or ‘maw’ as it is known in its processed state, the high prices it commands will encourage continued poaching.

EIA urges China to significantly strengthen its enforcement efforts, including engagement with authorities in Mexico and the US. The recent announcement of the closure of domestic ivory markets has demonstrated that the political will exists in China to take the action needed to save a species threatened by trade – we encourage China to show the same leadership to end the illegal trade in totoaba.

This is the very last chance we have to save the vaquita. To lose it forever would be a sad indictment of the global community and a terrible legacy to leave future generations.

By: Aron White
Wildlife Campaigner on the EIA Blog.