The IMF has said in its latest World Economic outlook (WEO) that global growth is still in low gear and that the drivers of growth are shifting.

Growth will now be driven by the advanced economies says the IMF as it expects growth in major emerging economies to be weaker than previously expected.

“This transition is leading to tensions, with emerging market economies facing both the challenge of slowing growth and changing global financial conditions,” said Olivier Blanchard, the IMF’s chief economist and head of the Research Department. 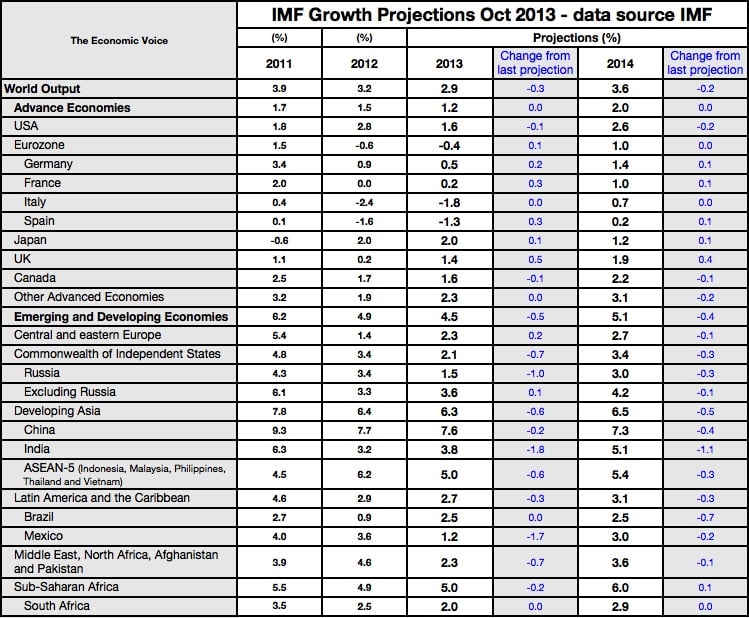 The projections for US growth have been reduced by 0.1 percent to 1.6 percent for 2013 and by 0.2 percent to 2.6 percent for 2014 – based on the premise that the recent budget led federal shutdown will be short-lived and the debt ceiling raised in time to prevent the country going over the fiscal cliff.

The IMF said that:

"Pulling the global economy out of a protracted period of subdued economic performance will require, first and foremost, advanced economies to address old challenges, and also emerging market and developing economies to steer through their growth transitions with credible policies.

"For advanced economies, the WEO reinforces many of the messages provided in earlier reports. The euro area needs to repair its financial systems and adopt a credible banking union supported by a common backstop. The United States should resolve its political standoff relating to fiscal policy, and promptly raise the debt ceiling. In addition, the Federal Reserve should carefully manage the process of monetary policy normalization, taking into consideration prospects for growth, inflation, and financial conditions. Both Japan and the United States need to accomplish medium-term fiscal adjustment and reform of their social safety net programs. And Japan and the euro area should adopt structural reforms to boost potential output."