While Tony Blair lectures Nigel Farage as well as the members and supporters of UKIP on the benefits of mass immigration saying that immigrants do not affect the ability of UK workers to get jobs, his favoured organisation, the EU, is considering setting up ‘holding centres’ in Africa for those people wishing to enter the EU.

Pointing at UKIP Tony Blair says that politicians who are hostile to immigration are pandering to prejudice, but UKIP have never said they are anti-immigration, far from it. UKIP wants a fair immigration policy, not a policy that is prejudiced in favour of those from the EU and prejudiced against people from the rest of the world. 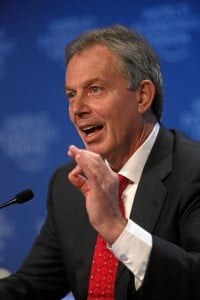 A look at the comments under this article in the Guardian, where those contributing normally lay into Farage and UKIP with the biggest brickbat they can find, shows the sheer scale of the doublethink in operation where immigration is concerned. Many of the comments would become ‘racist’ in EU supporters eyes if you just substitute the letters ‘UK’ instead of ‘EU’.

Tony Blair has said that, as a country, we’re not going anywhere with ‘…..an attitude that says we don’t like foreigners’. So what does the EU’s policy on immigrants trying to get into the land of milk and honey say? Does that mean they the EU is going nowhere?

Immigration involves people, other human beings. But some of our politicians believe that only those that live within the EU gated community matter – for EU federalist reasons, while hypocritically calling those that want to set the gate at our country’s border ‘racists’.

UK should prepare for wealth exodus after election