Online retail sales were up +11% in July, with overall conversion rate up significantly suggesting discount activity drove sales.The average spend on smartphones and tablets was also up.

UK online retail sales were up +11% year-on-year (YoY) in July, according to the latest figures from the IMRG Capgemini e-Retail Sales Index. This was the lowest July growth rate for the Index in four years (since July 2013), although it was building on a high growth rate recorded in July last year (when it was +18.6%). Growth for online sales so far in 2017 (Jan-Jul) is +12%.

There was a notable increase in the percentage of site visitors completing a purchase on online retailer sites in July, with the overall conversion rate reaching 5.8%, 21% higher than a year ago. The clothing and home and garden sectors in particular saw jumps in conversion rates, which were up 43% and 83% respectively. The fact that the conversion rate rise wasn’t matched by a similar boost in online sales revenue growth suggests that discounting activity was high in July, with the summer sales period in full flow and retailers under pressure from Amazon Prime Day. 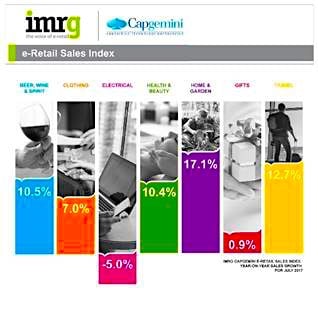 At the same time, the average basket value (ABV) on mobile devices was also markedly higher in July – with the ABV on smartphones up 21% while for tablets it was up 17%. It may be that the multi-context nature of mobile devices means they are well suited to the kind of impulse shopping that is stimulated by major discounting periods such as when retailers launch their summer sales.

June (-13.9%), which may be related to shopper awareness around Amazon Prime Day and the promise of getting a deal on electrical products during that event. The home & garden sector, meanwhile, was up +25% – a strong performance that was probably boosted by the hot weather in July. 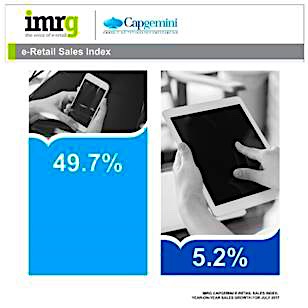 “87% of respondents to a recent retailer survey we ran claimed that the event has not led them to adapt their summer sales strategies – it does after all already fall during one of retail’s major discounting periods. Yet overall market growth of +11% for July, while solid enough, is probably a bit below expectation – while Amazon reported growth of +60% year-on-year for their 30-hour Prime Day period. Conversion rates being up sounds positive, but the fact that it didn’t deliver a similar boost to sales revenue growth suggests discounting was probably a factor in driving more visitors to complete a purchase. Prime Day is an established event in the calendar now and it may be exerting an impact judging by this month’s results, although other factors – such as rising inflation and consumer confidence – may also be at play.”

“We’re seeing the slowdown in purchasing continue across July as this trend of low consumer confidence lingers. With the pound almost running level with the euro luxury purchases and ‘nice-to-haves’ are hit hardest. While conversion rates are up broadly speaking, this is only with repeat buys or necessities. Even with enticing luxury offers made available to try and compete with Prime Day, more browsing choice lead to a further dip in conversion for these categories with consumers browsing more but buying proportionately less.”

Your Golf Travel looking to invest £30,000 into a business idea