The Arab Spring has shaken the Middle East and an innovative diplomacy is needed today in order to take advantage of the current shifts in the Middle East's strategic architecture.

An increased level of uncertainty has been generated under which most Middle East countries are unwilling to make any concessions with lasting strategic implications.

Furthermore, the Middle East is likely to face more instability in the near future and the incentives for maintaining or acquiring nuclear weapons are likely to increase.

Even without Israel and Iran there are inter-Arab and regional rivalries that provide impetus for proliferation. Observers of the Middle East scene said that the Middle East countries look around and they find that the non-Arabs have a nuclear programme or are on their way.

There is a feeling in the region, that they made a mistake when they opted for zero nuclear energy for the last 40 years and the Israeli and Iranian programme was a wake-up call.

There is a desire among certain Arab States to acquire a deterrent which brought Arab countries to embark on a nuclear journey against Israel's and now Iran's nuclear capabilities.

Arab leaders have become uncomfortable as lagging behind Israel and Iran in a region where Arabs make up the overwhelming demographic majority.

This resulted in severe criticism of the Arab leadership by the media and the intellectuals, which as a result motivated some Arab leaders to publicly discuss plans of nuclear acquisition to restore the appearance of strength and independence.

Over the years, it has become more difficult for the United States to bring its power of deterrence to bear in the Middle East. Some observers object to this line of reasoning and underline that Arab states would not dare risk jeopardising their bilateral security relationships with the United States by embarking on clandestine nuclear weapons programmes.

This unique dynamic and political climate provides the Arab countries with unprecedented regional legitimacy to pursue a robust nuclear programme.

Modern nuclear systems are easy to purchase as former limitations on the transfer of nuclear technology have been reduced. Apart from China and North Korea also Russia and Pakistan are in this business, motivated by economic power-based interests, which have contributed towards a renewed rise in the flow of highly sophisticated and strategically important technology to the Middle East. 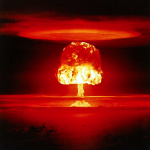 A number of Arab states have taken lately to set up and advance civilian nuclear power programmes as means for obtaining the capability to manufacture nuclear arms in the future. While every country has states that it has no plans to purchase nuclear weapons capability, the fact is that once a country has acquired advanced atomic capabilities it could initiate a weapons programme.

Civilian nuclear programmes can facilitate illicit procurement and provide technology and expertise to support a clandestine programme. The procurement of dual-use items or materials requested by a parallel weapons programme can be achieved without suspicions being raised as these programmes could be small and difficult to uncover.

It is not inconceivable that various countries will look for shortcuts and seek not only to promote a a civilian programme but also to acquire off the-shelf weapons.

A factor that looms large behind Middle Eastern aspirations for nuclear weapons is power and influence in regional and international politics.

Proliferation in the Middle East complicated security issues, and gave countries in the region the right to adopt policies and forge alliances with countries that that posses nuclear technology with a view to striking a military balance in the region in defence of their interests.

The cancelling of the conference in Finland, on a Middle East Nuclear Free Zone will have profound impact on the security and non-proliferation issues in the Middle East, and there is to take into consideration that the result could be, that in the foreseeable future several countries will decide on a collective break-out from the Non-Proliferation Treaty (NPT) and try to obtain weapon material.

For states interested in non-proliferation, maintaining the nuclear status quo within this unstable region will certainly remain challenging enough. The objective of a total nuclear disarmament in the Middle East will not be achieved as long as it excludes Israel.

As long as one other country has the potential to make and use nuclear weapons it makes no sense for any other country to give up altogether its own nuclear capability.