Responding to the Ministry of Justice’s announcement of changes to the Incentives and Earned Privileges scheme for prisoners,Â Frances Crook, Chief Executive of the Howard League for Penal Reform, said:

“Chris Grayling’s plans for new layers of red tape are unlikely to get prisoners out of bed and into work or training and may result in punishing people for an idleness that prisons encourage.

“Today’s announcement sees ministers pottering among the flowerbeds while ignoring the burning building before them. The fact that the prison population has doubled in the past 20 years has left prisons overcrowded and staff overstretched, with little choice but to lock people up in their cells all day with nothing to do.

“There have been numerous inspectorate reports published recently which have found prisons struggling to offer any purposeful activity within their walls. Â As their budgets continue to be squeezed, this problem will only get worse.

“It is bizarre then to introduce new layers of red tape which will only add to the cost of prison and demands on staff time. If a prisoner is downgraded to the basic regime, it needs to be very clear what went wrong, so staff will need training in new monitoring procedures and paperwork.

“It is also astounding that the Justice Secretary spends his time policing what prisoners watch on DVD to the point thatÂ Scary Movie 2Â or series three ofÂ The InbetweenersÂ will be banned.

“Instead, Chris Grayling should look at taking our prison population back to a manageable level; giving non-violent people community sentences, so something productive can be done with those who remain in prison.” 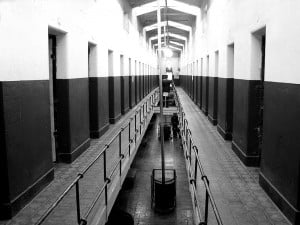 By Luis Argerich from Buenos Aires, Argentina (End of the world prison)