Despite the boom years in the late 1990s and the early 2000s income inequality has increased since 1985 says the Organisation for Economic Co-operation and Development.

The gap between the richest and poorest in OECD countries has now reached its highest level for 30 years are the findings of its new report “Divided We Stand: Why Inequality Keeps Rising”. Inequality is something that ‘governments must act quickly to tackle’ it says.

At the launch of the report in Paris the OECD Secretary-General, Angel GurrÃ­a, said “The social contract is starting to unravel in many countries. This study dispels the assumptions that the benefits of economic growth will automatically trickle down to the disadvantaged and that greater inequality fosters greater social mobility. Without a comprehensive strategy for inclusive growth, inequality will continue to rise.”

The trend has been greatest in Australia, Denmark, Finland, the United Kingdom, Mexico and the USA. But income inequality has actually improved in Turkey and Greece.

The graph below constructed using OECD data shows that in many countries income inequality has got worse since 1985. 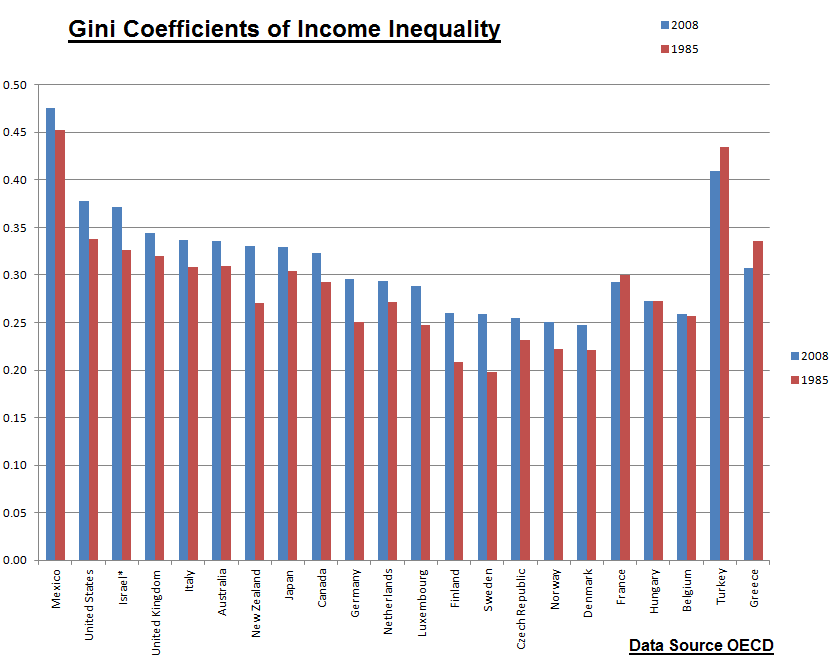 The OECD puts this down to the highly skilled being able to command higher salaries and wages as well as competition making labour forces more adaptable leading to part time hours and flexible working, which it says has ‘extended the wage gap’. This is made worse says the report by tax regimes that favour high earners.

“There is nothing inevitable about high and growing inequalities,” said Mr GurrÃ­a. “Our report clearly indicates that up-skilling of the workforce is by far the most powerful instrument to counter rising income inequality. The investment in people must begin in early childhood and be followed through into formal education and work.”

Countries should concentrate on realigning their tax systems so that the wealthy pay their fair share says the report.

So, far from the ‘trickle-down economics’ argument that was used to feed the rich more money, all that has happened is that the money has flowed upwards and stayed there.