•  Increase of a fifth on post credit crunch low

The amount of income tax paid by “non-doms” in the last year has hit a record high of £6.8billion*, up 8% from £6.3billion paid in the previous tax year says Pinsent Masons, the international law firm (see graph below).

Pinsent Masons says that the figures show that, despite their popular image, non-domiciles make a very significant contribution to the UK Exchequer.

Jason Collins, Head of Tax at Pinsent Masons, comments: “Non-doms are often portrayed as a group of plutocrats who add little to the UK economy and exploit loopholes to pay no tax. In fact the amount they have paid in income tax is up 19% in the last three years alone.

“They have huge spending power, invest in UK businesses and create thousands of jobs in the UK. They can’t do this if they aren’t here so The Treasury needs to be careful that they don’t kill the golden goose by overtaxing it. There are plenty of other countries competing to welcome these non-doms to their shores.

“This data on tax revenues show that non-doms are more important to the UK economy than ever before, with the income tax they pay helping to subsidise public services.”

Non-domiciles can opt not to pay tax to the UK Government on their income and capital gains that are based outside the UK as long as they do not bring that income into the UK. However, non-domiciles still have to pay tax on income that they generate in the UK.

Adds Jason Collins: “Whilst the instability caused by the Arab Spring saw an increase in non-domiciles living in the UK, there is the risk that if we heap more taxes on non-doms we will drive them away.”

A non-dom levy was first introduced in 2008. Non-doms who have been resident in the UK for seven or more years were obliged to pay an annual levy of £30,000 should they wish to continue to excluding earnings made outside of the UK from their UK income tax bill. However, this has recently been increased to £50,000 for those who have been in the UK for more than ten years.

Jason Collins points out that the £178m raised by the controversial new non-dom levy is just 2.6% of the UK income tax paid by non-doms.

The 2014 budget announced a reduction in the threshold for this “enveloped dwelling tax”, from £2 million to £500,000 to be introduced over two years. From 1 April 2015 a new band will come into effect for properties with a value greater than £1 million but not more than £2 million with an annual charge of £7,000. There will be a charge of £143,750 for properties worth more than £20 million.

Jason Collins adds: “Following the credit crunch and the collapse in Government revenues non-doms were seen as a handy scapegoat. Actually they have been major contributors to the public purse all the way through the recession.”

Jason Collins also points out that the high level of UK income tax paid by non-domiciles illustrates one of the advantages of the UK’s investor visa system. Investor visas allow a High Net Worth, with at least £1 million to invest in the UK (usually in gilts), to enter and remain in the country for three years. 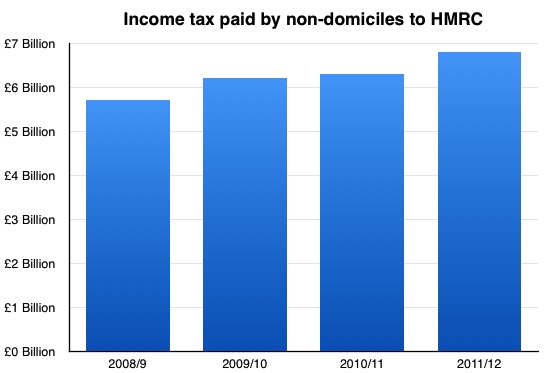 The History of Currency