In last week's article I posted a chart from the International Energy Agency'srecent Oil Market Report that shows global demand for refined products catching up to supply by the 3rd quarter of this year. My opinion is that all of the analysts who are now blaming the sharp drop in oil prices on a “glut” of supply could change their tune quickly as consumers adjust to lower fuel costs. Just as higher costs reduce demand for any commodity, lower costs will increase demand. This is especially true for a commodity that has a direct impact on standard of living, like oil does.

When the price of gasoline plunged below $1.00/gallon in 1986, demand for motor fuels and other refined products increased by almost 5% within twelve months. Today, world demand for hydrocarbon based liquid fuels (including biofuels) is over 92.5 million barrels per day. You can go to the IEA website and see for yourself that normal seasonal demand is expected to push demand over 94.0 million barrels per day within six months. I think both the IEA and our own Energy Information Administration (EIA) are grossly underestimating the price related demand increase that is already starting to show up in the data.

Last week's EIA report confirms that demand is already surging in the United States. Granted, part of the year-over-year increase in gasoline consumption may be a result of the harsh winter weather we had last year, but I think this story is going to play out. If gasoline prices remain low until this summer, we should see a sharp increase in the number of Americans that decide to take long driving vacations this year. We do love our SUVs. 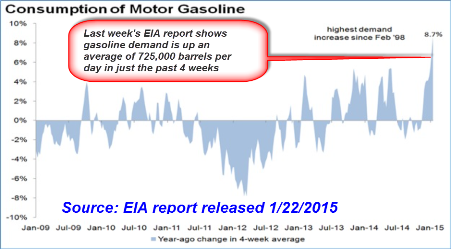 Today's low crude oil price is blamed on Saudi Arabia's decision not to reduce supply even though the world is oversupplied by an estimated 1.5 million barrels per day. If gasoline under $2.00/gallon increases global demand for motor fuels by half of the amount it did back in 1986 (2.5%), demand for oil will increase by 2.4 million barrels per day and today's “glut” will soon fade from memory.

Gasoline prices in Texas are now under $1.75/gallon at many discount stations.

It is going to take a while to work off the build-up in both crude oil and gasoline inventories, but if the IEA and EIA start reporting that demand is catching up with supply the NYMEX strip price for crude oil will adjust quickly. The December, 2015 futures contract for WTI crude oil closed at $53.12/bbl on Friday, January 23 ($7.83/bbl above the front month contract). By the way, this has a lot to do with why crude oil inventories are building.

Keep in mind that oil production is also going to drop in response to lower prices. The U.S. active drilling rig count dropped by another 43 for the week ending January 23, 2015 to 1,633. Based on the upstream companies' capital budgets that I'm seeing, I expect the active rig count to drop below 1,000 by the end of May. We will soon have less than 700 rigs drilling for oil in this country and that means U.S. oil production will be on decline by the 4th quarter. In the last three years, only the U.S., Canada and Brazil have increased production. The rest of the world's oil production has been in decline despite previous $100/bbl oil prices. 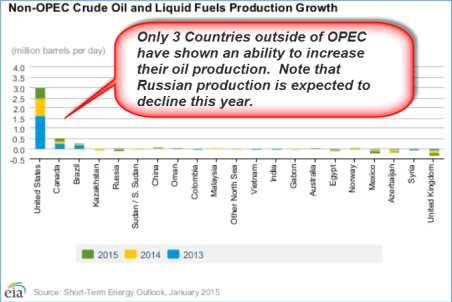 Even before the sharp decline in oil prices, global demand for oil was growing at a rate of 1 million barrels per day per year. In my opinion, within six months the rate of demand growth will accelerate to over 2 million barrels per day. Demand could go even higher if consumers adjust their driving habits like they did back in 1986.

The upstream oil & gas producers will soon be reporting 4th quarter results, including updated reserve reports. Now is the time to add the best oil producers and MLPs to play the coming rebound in oil prices.

For more on this topic see: http://www.prienga.com/blog/2015/1/20/supply-minus-demand-explained

By Dan Steffens for Oilprice.com