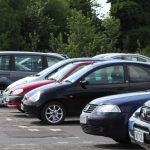 This time last year, 87 per cent of dealers were optimistic about the business climate, describing it as “stable”, “good” or “very good”. Now the figure stands at 74 per cent. And a year ago, 95 per cent of independent dealers were confident that business would remain stable, improve “a little” or “significantly” over the following quarter. Now 87.5 per cent concur with this prediction.

Competitive finance deals and incentives are increasingly being offered by franchised dealers, luring customers away from independents offering late plate and nearly new cars. Car supermarkets, many of which specialise in older cars, are also providing competition for the squeezed independents.

Sales and marketing director at RAC Warranty, Ian Simpson, explains: “A few years ago, you would see few cars more than three years old at a franchise dealer or more than five at a car supermarket.

“Now, you might see customers with cars up to five or six years old being actively courted by franchise dealers and car supermarkets retailing vehicles up to seven or even eight years old.

“This means that independent used car retailers are being increasingly squeezed and, while they have several strengths that have genuine appeal to customers and can compete very successfully, there are also areas where some recognise that they must raise their game in order to compete.”

But CAP’s survey also reports that independents are now finding it easier to source the cars they want. A year ago, franchise dealers were struggling to sell new cars and were fighting with the independent dealers for high quality used cars. This additional competition for stock was a real headache for independents, but now that franchise dealers are refocusing their efforts on new business, independents have an opportunity to recover. RAC Warranty believes that dealers are starting to improve their customer offering and fighting back against competition from franchises and car supermarkets.

If they move with the times, independent motor traders can compete with their larger counterparts. Times may be tough, but it’s important that every trader continues to protect themselves and their businesses by taking out a motor trade insurance policy with a specialist provider such as Unicom Insurance. Every trader should think about insurance coverage for their own and their customers’ vehicles, their premises, stock and equipment. The most effective policies are those that offer independent dealers full protection with minimal risk exposure and the flexibility to operate efficiently. Independents who choose to cut corners by failing to take out adequate insurance could find themselves facing some hefty insurance claims. Something everyone can do without given the other pressures in this climate.

The Reality of the Help to Buy ISA