India opts for French jet over the Eurofighter

In what is being seen as a bit of a kick in the teeth for the UK after it has poured aid into the country, India has selected the French jet fighter offering for final negotiations.

The French fighter jet, the Dassault ‘Rafale’ has been given the nod over the Eurofighter Typhoon for the huge Medium Multi-Role Combat Aircraft (MMRCA) Â£7 billion contract to supply 126 fighter aircraft to India.

In what the Times of India calls ‘…the largest such "open-tender" military aviation deal in the world’, the Rafale was chosen as it was the lowest bidder. This was based on complex mathematical calculations over the unit cost of each proposal.

Speaking in PMQ’s today the UK Prime Minister, David Cameron, did say that this contract had still not been signed and that he would press to get India to change its mind.

This will no doubt be mirrored in the other three countries involved in the Eurofighter project; Germany, Spain and Italy.

The contract will, says the Times of India, take another four to five months to be ‘inked in’ and that the first 18 aircraft would be flown in from France in mid 2015 with the remaining 108 being built over a six year period in India.

Nicolas Sarkozy, the French President, has welcomed the Indian decision to choose the Dassault aircraft saying that the selection “goes far beyond the company that makes them, far beyond aerospace — it is a vote of confidence in the entire French economy.” 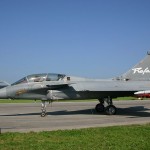 The Rafale programme, says dnaindia.com, had been suffering from a lack of foreign contracts, so this will come as a welcome boost for the company. It also points out that the French jet has been involved in the Afghanistan and Libyan campaigns.

But as the Express points out one of the things that is souring this is that the UK gives India some Â£280 million a year in aid, far more than France does. And it comes on the heels of Sarkozy’s jibe about UK manufacturing.

But we must remember that decisions such as this must be made on the business requirements of the purchaser, not just because we bunged them a few quid in aid.

The Rise of the Part-Time Pensioner