India's relentless search for hydrocarbons to fuel its booming economy has managed the rather neat diplomatic trick of annoying Washington, delighting Tehran and intriguing Baghdad, all the while leaving the Indian Treasury fretting about how to pay for its oil imports, given tightening sanctions on fiscal dealings with Iran.

On 7 June the US State Department reluctantly announced that it was renewing India's six-month waivers [1] for implementing sanctions against Iran, along with seven other countries eligible for waivers from the sanctions owing to good faith efforts to substantially reduce their Iranian oil imports. In New Delhi's case, it is the U.S. and EU-led sanctions rather than any willingness on India's part that has seen a fall in its Iranian oil imports. India is the second largest buyer of Iranian oil, a nation with whom it has traditionally had close ties. U.S. Secretary of State John Kerry said that India, China, Malaysia, South Korea, Singapore, South Africa, Sri Lanka, Turkey, and Taiwan had all qualified for an exception to sanctions under America's Iran Sanctions Act, based on additional significant reductions in the volume of their crude oil purchases from Iran. Kerry told reporters, "Today's determination is another example of the international community's strong and steady commitment to convince Iran to meet its international obligations. This determination takes place against the backdrop of other recent actions the administration has taken to increase pressure on Iran, including the issuance of a new executive order on June 3. The message to the Iranian regime from the international community is clear: take concrete actions to satisfy the concerns of the international community, or face increasing isolation and pressure."

But even with Washington's beneficence, New Delhi is struggling to find ways to pay for its Iranian oil imports.

The U.S. and European sanctions have deeply affected Iran's international oil trade, reducing its exports by more than 50 percent and costing Iran billions of dollars in revenue since the beginning on last year. Tightening the screws, the Obama administration is now attempting to reduce Iran's oil exports even further, to less than 500,000 barrels per day through tighter sanctions. Nevertheless, despite plummeting sales overseas, Iran, OPEC's second largest oil exporter, remains one of the world's largest oil producers, with sales bringing in tens of billions of dollars in revenue annually.

And Iran is anxious to keep India as a favored customer. Last month Iran offered India lucrative terms for developing its oilfields, routing a proposed natural gas pipeline through the sea to avoid Pakistan as well as insurance to Indian refiners provided New Delhi raised oil imports. Making its case, Iran sent a high-level delegation led by Oil Minister Rostam Ghasemi to India to urge New Delhi to raise its oil purchases, which slid to 13.3 million tons in 2012-13 from 18 million tons in 2011-12. Heightening Iran's concerns, later this year Indian imports are slated to fall further to around 11 million tons.

After meeting Ghasemi Indian Oil Minister M. Veerappa Moily issued a statement noting, “The Iranian side encouraged the Indian side to increase its crude purchase (www.defence.pk/forums/indian-defence/254976-iran-offers-oilfield-pipeline-india-raising-oil-imports.html). “The Indian side explained that it would encourage companies to maintain their engagement in terms of crude oil purchase, taking into account their requirements, based on commercial and international considerations.” 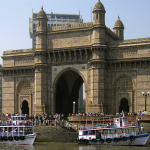 Gateway of India by Rhaessner

While Iranian-Indian trade ties continue to deepen, with Indian-based Consul General of Iran Hassan Nourian predicting that bilateral trade between India and Iran will be worth $25 billion (www.defence.pk/forums/world-affairs/251687-india-iran-trade-poised-cross-25b-4-years.html#ixzz2VjM5DFfH) by 2017, India is hedging its bets about energy imports, and where to make up the shortfall from the increased sanctions regime.

…and what better place to look than the Middle East's rising petro-state, Iraq?

Top of the agenda?

It is a potential marriage made in heaven. Iraq needs an assured market for its increasing crude production, having set itself a production target of 7 million bpd from its current 3 million bpd, while India is in search of a long-term partnership with a major oil producer.

While such deepening ties will thrill Washington as much as they distress Iran, there is still a wild card in the Iraqi mix – China, now Iraq's biggest customer, already purchasing nearly half the oil that Iraq produces, almost 1.5 million barrels a day. Worse still for Indian aspirations, China is now trying for an even bigger share, bidding for a stake currently owned by Exxon Mobil in one of Iraq's largest oil fields, West Qurna.

Image By Rhaessner (Own work) [GFDL (http://www.gnu.org/copyleft/fdl.html) or CC-BY-SA-3.0 (http://creativecommons.org/licenses/by-sa/3.0/)], via Wikimedia Commons