"Most of my clients are worried about the Fed's 'tapering' – buying less bonds per month – because the economy has been a little weak due to the government shutdown," says investment manager Elaine Garzarelli. "The last times the Fed didn't taper, but ended Quantitative Easing (QE), the stock market went down, one time 10%, and one time 20%. So clients are afraid that the Fed will stop QE.

"But a tapering is not an ending of QE, like it was before; a tapering is just a reduction in the amount of bond buying. The real problem for the market occurs when we have an inverted yield curve, which means the Fed raises short-term rates above long-term rates. We're talking about a few years before this can occur," she continues.

"We believe the economy is set to accelerate in the fourth quarter, similar to the last three years. In the 1995 government shutdown, consumer activity recovered quickly. Interestingly, the shutdown has helped by delaying tapering."

In the Garzarelli Capital Client Letter just issued, Dr. Garzarelli explains that her yield curve indicator – one of the key factors in her monetary indicator composite – has in fact been bullish since October 2008. "We are just not seeing the inverted yield curve that would give us any cause for alarm."

"But we are seeing no evidence of this happening any time soon," she says. "A bullish signal for this indicator is when the fed funds rate is 200 basis points or more below the 10-year bond rate. Currently, the 10-year bond yield is at 2.50 percent, and the Fed funds rate is 0.09 percent – a spread of 241 basis points, which is extremely bullish." 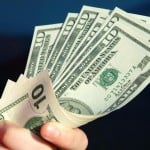 "The Fed would need to taper and then raise the short-term rate over 2.0 percent to have us concerned. But with inflation quite low, we don't see the Fed feeling the need to raise rates for a long time."

Overall, Dr. Garzarelli's proprietary stock market indicators this week remained bullish, with these indicators, among others, continuing to factor in:

– QE is helping propel stocks as the Fed stays easy until a stronger recovery takes hold.

– The federal government shutdown has helped delay tapering by the Fed.

– Expectations of the Fed's tapering keep getting pushed farther out, with March seen as the most likely time.

Elaine Garzarelli, President of Garzarelli Capital, Inc., is an economist with a doctorate from Drexel University in economics and statistics. She worked for major institutional brokerage firms for over 15 years while perfecting her market and industry econometric timing models, and was ranked #1 for 11 consecutive years on Institutional Investor's "All-Star" team for Quantitative Analysis and was recently inducted into the Hall of Fame. She started her own companies in 1994, and currently runs the "Sector Analysis" fund.

What type of trader are you?

LIBOR – yet another banking scandal