Inflation and the cost of food price speculation

Just as inflation figures are released showing that inflation has increased in the UK a new report points the finger at speculators as the cause of globally rising food prices.

The Office for National Statistics has released the inflation figures for August, which shows that the Consumer Prices Index (the UK’s interpretation of the internationally agreed measure for inflation) was 4.5% in August and the Retail Prices Index (which includes mortgage interest payments, council tax and some housing costs) was 5.2%.

Within this though the cost for bread and cereals rose by 7.1% in the year to August and overall food prices went up by 6.2%. These are both well above the headline inflation rate.

But while the UK sees what its population feel is a large rate of price increases, in developing countries this level of price rises can mean starvation for millions as a new report by the World Development Movement shows.

This report points the finger for what is a developing food crisis at the modern practice of speculating in food prices. 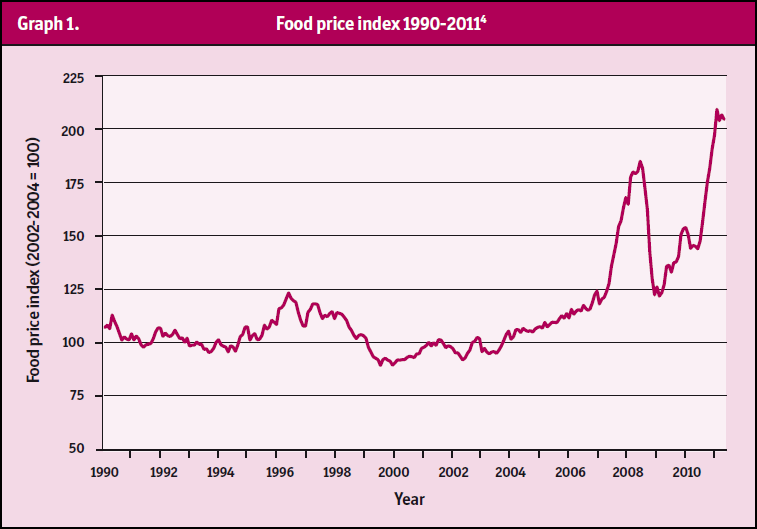 Murray Worthy the author of the report said “Financial speculators have flooded food commodity markets, creating massive inflation and sudden price spikes. These broken markets are bad news for people in the UK, whose average annual food bills increased by Â£260 in one year alone. But for people in poverty in developing countries, who already have to spend a huge proportion of their income on food just to survive, price rises are disastrous. Millions more people are going hungry because reckless investment banks are using food prices to make massive profits.”

“The US has already passed legislation aimed at limiting speculation on food prices, and similar European proposals are due to be announced this autumn. It’s disgraceful that the UK government is trying to block European regulation, when a billion people don’t have enough food. It should instead make sure that hard, clear rules are set, to stop this financial game-playing driving up hunger.”

The report (Broken Markets – wdm.org.uk/sites/default/files/Broken-markets.pdf) shows that not only is the total amount of money speculated on commodities some 20 times that spent globally on agricultural aid, financial speculators now hold over 60% of some basic food markets when just 15 years ago it was only 12%.

This huge influx of money speculation has, says the report, forced food prices up with food rising in developing countries by 55% since 2007. In the Sub-Saharan region of Africa one third of the population goes hungry.

A statement by over 100 civil society organisations, including Focus on the Global South, Africa Development Interchange Network and Alianza Mexicana por la AutodeterminaciÃ³n de los Pueblos said: “Enormous amounts of capital are flooding these markets, causing sudden food price spikes that can be lethal for low-income families in developing countries. Increased volatility caused by the influx of ‘hot money’ into and out of commodity markets is also causing havoc for farmers, who cannot predict what price their crops will command from one month to the next”.

The commodity speculators say that they are aiding price discovery and stabilising the markets, but this report takes that argument apart piece by piece.

A price rise of a few pence in the UK means that we might buy a cheaper brand. In a developing country it possibly means a choice of which child goes hungry today.

The report goes into detail on how to overcome this by ensuring such things as proper market transparency and setting speculative position limits. As Sir Richard Branson, founder of Virgin Group, cited in the report said “There is strong evidence that speculation exacerbated the last oil and food bubble. Speculation will fuel the next one too, unless meaningful speculative position limits are established.”

So the next time that loaf of bread has gone up a few pence just spare a thought for those who live on so little in the developing world.