Inflation at 0.1% in the year to July

The latest inflation data from the Office for National Statistics (ONS) shows that the annual rate of CPI (Consumer Prices Index) inflation for the year to July 2015 was 0.1 percent. This is up from the zero percent seen in June 2015.

The main driver to this small rise was a “smaller fall in clothing prices on the month compared with a year ago” said the ONS. This was partially offset by falling food and non-alcoholic beverage prices.

The inflation measure that includes costs for homeowner/occupiers increased to 0.4 percent in the year to July 2015 compared to 0.3 percent for the year to June.

Using the old measure, the Retail Prices Index (RPI), inflation was one percent in the year to July 2015, whilst the update measure, RPIJ, was 0.4 percent, unchanged from June 2015. 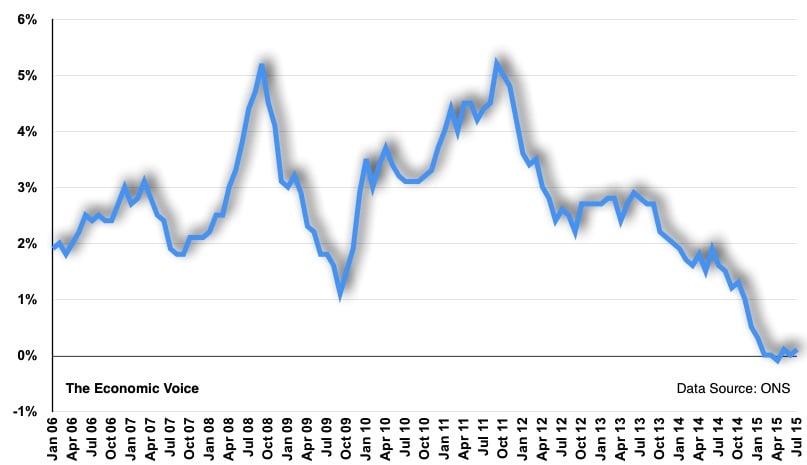 “July’s uptick in inflation represents something of a false signal. The increase is largely due to clothing prices, with this year’s summer sales seeing less discounting than last year’s, and an increasing pressure on air fares. Overall, the modest pickup in inflation appears to be largely a function of temporary factors rather than a sign that inflationary pressures are escalating.

“There is a good chance that we will see the CPI measure turn negative again in August. Base effects are set to depress the year-on-year comparison, while the renewed drop in oil prices is steadily feeding through to prices at the pumps. In addition, today’s producer prices data indicates that there are still no inflationary pressures coming along the supply chain, while the strong pound continues to weigh on import prices.

“Overall today’s data did little to alter our forecast for inflation. We still expect inflation to pick up from the latter part of this year, once the sizeable base effects caused by last year’s collapse in oil prices begin to kick in. However, the absence of underlying inflationary pressures suggests that the headline rate will remain some way short of the 2% target next year. With most of the MPC sharing this view, today’s data is likely to have little impact on the future for monetary policy.”

“Inflation remaining so far below target shows that the strength and stability of the recovery can’t be taken for granted. With our future economic prospects still so uncertain, early interest rate rises would bring real risks to households.

“There is still a large living standards gap to make up, and it won’t be closed without a higher productivity recovery. The government’s productivity plan won’t work without significant investment in skills, innovation and infrastructure. We need a sustainable recovery that works for the many and not just the few.”

"For over six years official interest rates have been at 0.5% with £375 billion of money printed. A modest rise in interest rates now may help forestall larger rises later, so ultimately could protect mortgage holders. Meanwhile, pensioners and those on fixed incomes have been squeezed for too long, while banks have failed to allocate capital to more productive uses. UKIP believes that low inflation at the moment is not a good excuse to keep interest rates continually at crisis levels".

“The latest inflation figures are generally positive for the UK economy. Food and fuel prices have continued to fall, meaning more discretionary income for families in the UK. .  “One major concern for freelancers will be the continued increase in travel costs. Both rail and air fares have continued to rise and this will directly increase the costs of doing business for self-employed people who tend to work all over the country and abroad.  “The figure has barely turned positive, so has a long way to go before reaching normality and a point where the Bank of England should consider increasing interest rates. In the Bank’s most recent inflation report they pushed back forecasts for when inflation will pick up, and we believe the path for interest rates should also follow suit.”

James Sproule, chief economist at the Institute of Directors, said:

“Business, consumers and rail passengers will cheer this month’s low inflation figures. A temporary period of low inflation is contributing to the UK’s competiveness and underpinning strong economy performance. As the prices of commodities fall, businesses have the opportunity to spend a little less on raw materials, energy and transport, and a bit more on hiring staff, giving pay rises, paying down debt and other investments.

“It is important that a low headline rate of inflation does not stand in the way of normalising interest rates. Core inflation has hit a five-month high and the Bank of England expects inflation to return to two per cent over the next few years. Combined with strong wage growth, low unemployment and improving productivity, the UK economy is in good health. In such circumstances, it makes no sense for interest rates to be at a historic low.

“The decision on when to raise interest rates is always as much art as it is science, and the Bank of England is looking at a blank canvas. Rates have been at 0.5 per cent for more than six years, and millions of new businesses, homeowners and investors have never known a period of rising rates. Therefore, it is right that Mark Carney has committed to increasing them at a “slow and gradual” pace. The sooner he acts, the more able he will be to keep the course of rate rises in check.”

"Annual UK consumer price index (CPI) inflation rose to 0.1% year-on-year in July, up from zero in June. Although the rate of inflation remains very low, the latest figures did surprise to the upside as the consensus was for no change. Food and energy price inflation continue to drag the figures lower, caused by the slump in global commodity prices. However, once these are stripped out, core inflation was recorded at 1.2% year-on-year, up from 0.8% year-on-year in June, and higher than consensus expectations of 0.9%.

"Also in this month’s release, inflation based on the retail price index (RPI) rose 1% year-on-year, unchanged from the previous month. This is good news for rail passengers as the government has pledged to only raise rail fares by RPI next year.  At just 1%, the next fare increases will be considerably lower than those seen in previous years, and should be lower than wage inflation in 2016.

"Overall, the latest inflation figures show signs of a healthy economy that is enjoying the dividends from lower global commodity prices. The Bank of England has started to question how long interest rates can remain at current record-low levels, but in our view, is unlikely to hike rates before CPI inflation returns to at least 1%, which may not happen before the second quarter of 2016."

“Today’s news confirming six months of flat prices will be welcomed by pensioners, with macroeconomics now swinging in their favour as they benefit from the ‘triple lock’ minimum pension increase of 2% per year. Inflation is being held back by the strong pound and lower oil prices, and is likely to remain minimal in the short term. The inflation figures also raise probability of the first rate hike since 2007 being after Christmas, not before.”

“This morning’s inflation figures are higher than expected but could easily fall back next month. Brent Crude has dropped below $50 a barrel and China, the world’s largest exporter, is potentially now unleashing a new wave of deflationary forces around the world through the devaluation of its currency. In this context it’s unclear why the Bank of England would consider raising rates anytime soon, even after today’s surprise figures. You could argue that wage growth is picking up and may begin to filter across into higher prices, complicating the decision for the Bank. Even so, it is hard to envisage a rate rise this side of Christmas.”