The annual rise in the Consumer Prices Index (CPI) reached 2.3 percent in February 2017, which is its highest since September 2013 when it was 2.7 percent and a marked rise on last month’s 1.8 percent.

The main contributors to the rise were transport costs, especially fuel said the Office for National Statistics (ONS). Food prices also rose by 0.3 percent over the year after showing falls over the last 31 consecutive months. 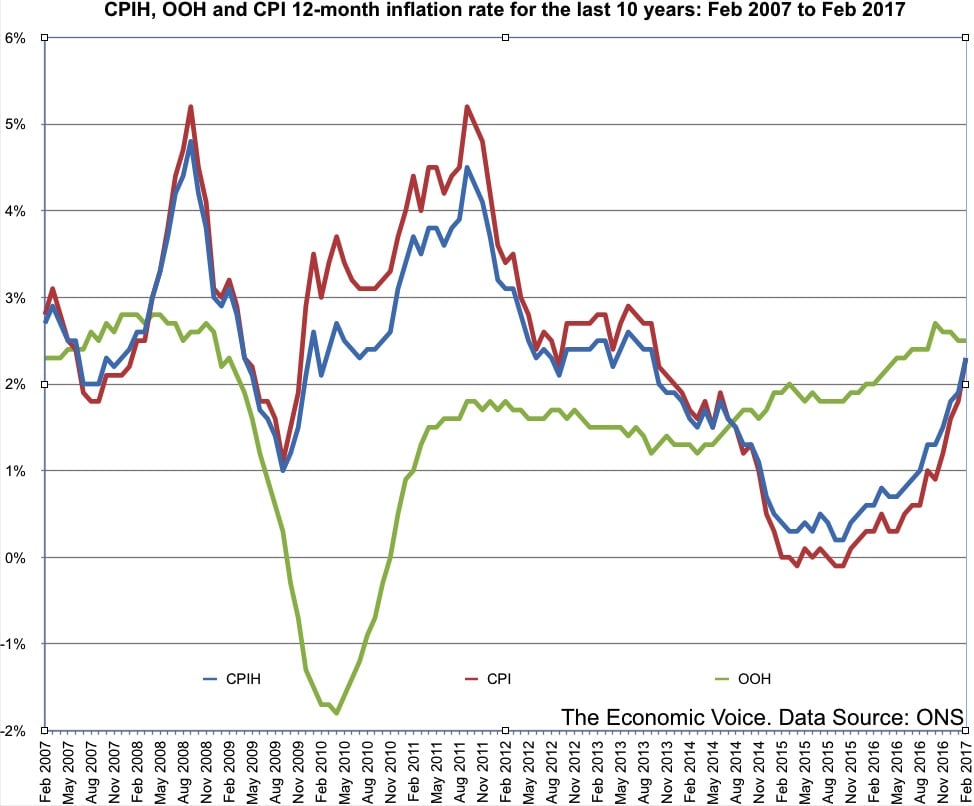 Anna Leach, Head of Economic Intelligence at the CBI, said:

“While inflation has risen above the Bank of England’s 2% target, it is still relatively low by historical comparison. Nonetheless, inflation is likely to rise further still, on the back of stronger fuel prices and as the impact of the weaker exchange rate feeds through.

“Also, other price data indicates rising costs for businesses, with input prices up 19% on the year.

“Today's sharp increase in the cost of living means that after seven years of Tory economic failure, it is working households and small businesses who are taking the hit with wage growth once again below price rises.

"As inflation breaks through the Bank of England's target for the first time in more than three years, real earnings are lower than they were before the crash. At the same time this is a government that is handing out £70 billion in tax giveaways to the big corporations and the super-rich, but doing nothing for ordinary working people.

"The national debt is set to hit almost £2 trillion by the end of ten years of the Tories in government, and our NHS and social care system are in the worst crisis in their history. Only a Labour government will invest in our public services, create a fair tax system, and introduce a £10 an hour Real Living Wage."

“CPI inflation continued to accelerate in February, rising from 1.8% to 2.3%, the highest rate in three and a half years. February’s larger than expected pickup was mostly due to the unwinding of January’s unusual seasonal movements in clothing prices and a sizeable contribution from petrol, which had seen prices rise between January and February this year but fall over the same period in 2016.

“We continue to expect inflation to accelerate as we move through the year. Though the worst of the base effects from last winter’s fall in the oil price are now behind us, the recently announced rises in domestic energy bills will hit the index over the next couple of months. And the effects of the weaker pound should continue to feed through this year, taking inflation above 3% towards the end of 2017.

“Separately, public sector net borrowing came in at £1.8bn in February, £2.8bn lower than a year earlier. With January’s surplus also revised up, the Government is on track to see borrowing come in around £1bn lower than the OBR’s full-year forecast of £51.7bn. Although experience tells us that there could still be some substantial revisions to the historical data over the coming months.”

“With rising inflation pushing up the price of our everyday essentials, even the savviest of savers may start to feel the pinch. In particular, older generations, a large proportion of whom commit the majority of their income to energy and food, may find themselves facing extra strain on their finances and eating into their savings.

“With inflation only on the up, it has never been more important to plan ahead. This is about more than just financial security – it’s about peace of mind. Whether it’s starting a rainy day fund or purchasing a funeral plan, you’ll be safe in the knowledge you and your family will be financially protected from any sudden disasters, whether that be an unexpected bill, an accident or even death.”

“February’s CPI was somewhat higher than the consensus forecast figure of 2.1%. Core CPI was also stronger than expected at 2% vs. 1.7% forecast, suggesting that inflationary pressures continue to be widespread and not purely restricted to currency-sensitive sectors.

“Today’s announcement comes at a sensitive time for the BoE given the 8-1 split at the last MPC meeting and suggests the central bank patients is likely to be further tested over the coming months. Gilts yields reacted to the news by drifting higher with the yield on both two and 10-year Gilt up by 6bps while the GBP/USD FX rate also strengthened with cable currently trading up one cent on the day.”

"It is no surprise to see inflation picking up further and going above 2 percent. This is the product of increasing global price pressures and the weakness of the pound.

"Inflation has been rising across a range of countries recently – including the United States and members of the Eurozone – as higher energy and food prices feed through to consumers. The additional upward pressure from the decline in sterling over the past 18 months will push UK inflation up further over the course of this year – to 3 percent or possibly higher.

"Higher inflation will squeeze consumer spending to some degree but if the economy remains resilient, the Bank if England MPC should be considering a rise in interest rates to counter the surge in inflation."

Europe sells a few Dollars as US storm damage is counted