Annual Consumer Price Index (CPI) inflation fell back to the target of 2 percent in December 2013, a slight drop on November’s 2.1 percent. This is the first time that CPI annual growth has been at or below the target since it stood at 1.9 percent in November 2009.

The reduction in prices for food & non-alcoholic beverages as well as recreational goods & services were the main drivers for the fall says the Office for National Statistics. There was a an upward contribution from motor fuels that partially offset the inflation fall. The December rises in gas and electricity prices also placed upward pressure on inflation in December.

When taking owner occupation costs into account CPIH grew by 1.9 percent in the year to December 2013, no change on November. The new measure based on the old Retail Prices Index – RPIJ – was also the same as in November staying at 2 percent.

Commenting on the data Paul Sedgwick, Head of Investments at Frank Investments, said:

“From the US to Japan and everywhere in between, economies around the world are pumping liquidity into the global markets at a staggering rate. Yet despite this, those same economies are now reporting inflation below expectations. Which begs the question, where is all the money going?

“Investors are being scared off the bond markets because they expect to see a rise in global inflation, but actually, there are signs of deflation at the moment. All this suggest that the money is not getting to where it needs to be and is being held out of reach by the banks.

“If banks continue to bottleneck the funds and not feed money into the system, there will be no economic growth and any inflation without growth is cause for concern. At the moment the UK is not seeing any wage inflation and without this the economy will remain stagnated.

“More needs to be done to set the funds free, to get it where it’s needed and not be trapped within the banking system. To help do this we can expect Mark Carney to step forward in the next few days and lower his forward guidance for interest rates changes by 0.5 per cent to 6.5% unemployment.”

“It has been a long road, but after a gap of four years we’re finally back at the 2% target. The combination of pre-Christmas discounting and a stronger pound appears to have been key to pushing inflation down, offsetting the effects of higher energy bills.

“With producer prices also subdued, there is a good chance that inflation will drop below target in early-2014. Indeed, at some point within the next six months, we expect earnings growth to overtake inflation, finally ending the prolonged real wage squeeze. Such a boost to households’ purchasing power would put the consumer outlook on a more solid footing and help to sustain the UK recovery.

“With inflation now back at 2%, and the outlook for inflation subdued, the MPC are more focused on the outlook for unemployment. Ensnared in their own forward guidance puzzle, the MPC will soon have to fine-tune this policy, possibly as early as the February inflation report.” 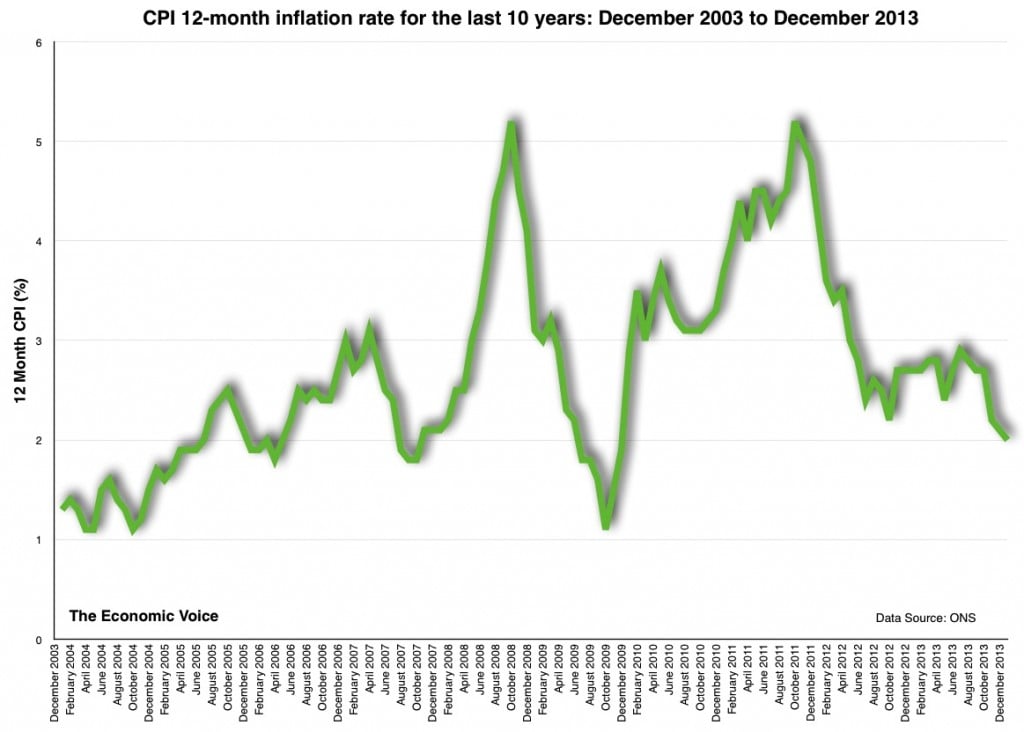