After 0.1 percent deflation in October the latest CPI data from the Office for National Statistics (ONS) shows inflation ticked up into positive territory at 0.1 percent in November 2015.

Upward pressure was provided by transport as well and alcohol sea tobacco, which was partially offset by falls in clothing prices says the ONS.

The unofficial measure that includes homeowner/occupier costs (CPIH) grew by 0.4 percent in November, up from the 0.2 percent seen in October. 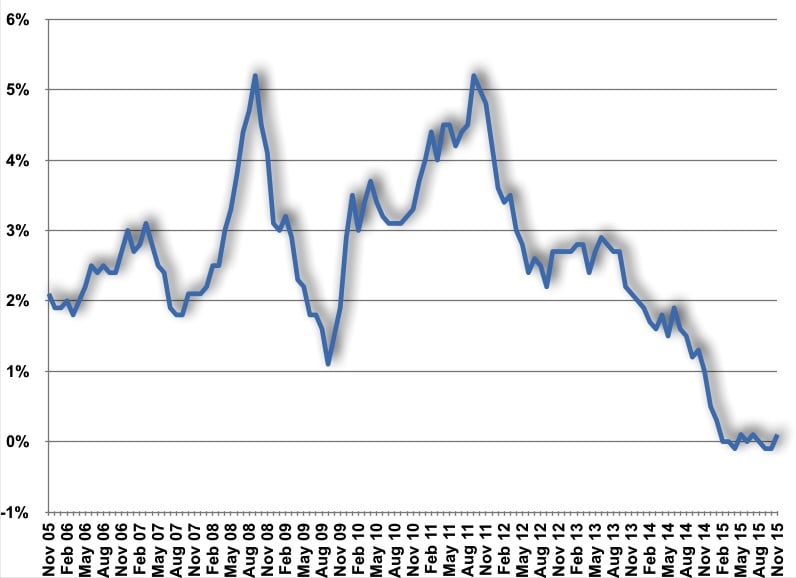 Michael Martins, Economic Analyst at the Institute of Directors, said:

“Inflation may still be hovering around zero, but with the sharp drop in oil prices set to fall out of the index, this should be one of the last months where prices flat-line. The temporary period of low inflation has been a boon to the UK economy, shoring up our recovery, stimulating demand and boosting wages in real terms. The threat of Britain slipping into serious deflation was always small. The public still expects prices to go up over the next few years – an important indicator of consumer confidence and a sign that there is little prospect of deflation becoming entrenched.

“As inflation begins to climb, it will be a test of the British economy to see if we can cling on to the strong wage growth and productivity gains of recent months, or whether they will dissipate as prices begin to rise. Despite real wages growing strongly in 2015, nominal increases were still small. Employees may begin to demand higher wage increases in cash terms once prices begin to go up and they feel the pinch on their disposable incomes. When this occurs, employers and staff will be under even more pressure to raise productivity to pay for sustainable wage rises.

“With the US Federal Reserve likely to raise rates this week, this will alleviate some deflationary pressure in Britain. This will give the Bank of England a little more flexibility once it decides to normalise interest rates on this side of the Atlantic.”

“November’s figures are likely to mark the beginning of the long road back towards the 2% target, with the base effects associated with last year’s collapse in the oil prices now having started to kick-in. We still expect inflation to remain below 1% until well into 2016, requiring the Governor to write a further series of open letters of explanation to the Chancellor.

“In this context, there is little chance of the MPC raising interest rates anytime soon. The Committee’s members will wait until a sustained pickup in wage growth is evident, but realistically this is likely to take some time to materialise.

“If the recent weakness in commodity prices intensifies then both inflation and interest rates will take even longer to pick up.”