Inflation in the UK continued its downward trend in May as the Consumer Prices Index (CPI) annual inflation rate fell from 3% in April to 2.8% in May.

This is the lowest annual rate of increase seen since November 2009 when CPI inflation stood at 1.9%.

The annual inflation as measured by the Retail Prices Index (RPI) also fell in May to 3.1% from April’s 3.5%, the lowest rate since December 2009. (For an explanation on CPI/RPI differences please see the note at the foot of this article.)

Many analysts had expected inflation to hold at 3% in May so it has come as a bit of a surprise. 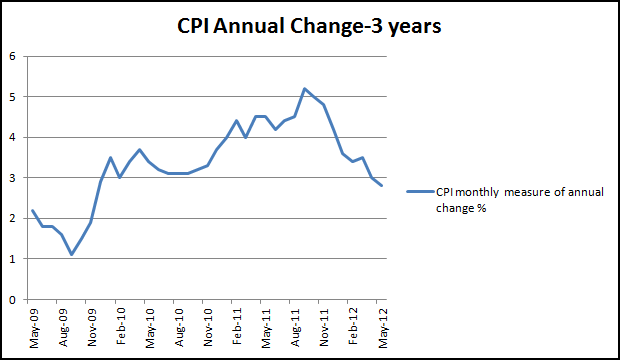 CPI to May 2012-The Economic Voice 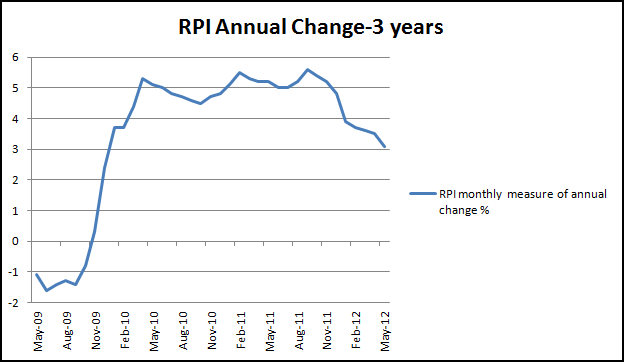 RPI to May 2012-The Economic Voice

“Today’s CPI inflation figures will come as a huge relief to the MPC. Temporary factors that had been keeping inflation elevated for over a year are finally starting to fall out of the calculation.

“The headline figure is lower than we expected. Although petrol prices, which hadn't started falling at the time of the April figures, were always expected to exert a significant downward pressure on overall prices, we expected this to be offset by higher air fares which were low last month due to the timing of Easter.

“This data strengthens our conviction that inflation will come back towards the 2% target by the end of the year and sets the scene for further monetary policy easing. In recent speeches, the Governor has already made it clear that the case for implementing more QE has risen and today's data gives the Bank increased flexibility to put this into effect. We wouldn't be surprised if the Bank authorised further asset purchases as early as next month.”

CPI is the governments preferred measure of inflation and differs from RPI as follows: (from the ONS website):