The upward pressure was mainly from price increases in motor fuels and clothing & footwear said the Office for National Statistics.

Air transport however did exert some downward pressure on the index.

Using the new and experimental measure of CPIH (that's CPI with owner occupiers' costs included) annual inflation also went up by 0.2% to 2.5% in June.

The 0.2% increase looks to be a popular figure across the board.

“A second successive increase may concern some, but the reality is that it could have been a lot worse and it really is nothing to worry about. The pickup in inflation reflects conditions a year ago, rather than what is happening now, when petrol prices fell sharply in June and retailers started their summer discounting early.

“Inflation is likely to drop back over the next few months as these base effects soften. There is little sign of any inflationary pressure from the supply pipeline and, with global growth disappointing, we could even see commodity prices soften further. Base effects will also swing the other way in the autumn, when food and domestic energy prices are unlikely to rise at the same rates we saw last year.

“Nevertheless, we think it is unlikely that we will see inflation move back to the 2% target in the foreseeable future. The persistence of higher inflation in administered & regulated prices – such as university tuition fees, rail fares and energy – and the end of deflation in imported goods prices, means that it is going to be very hard for the MPC to get inflation back to target. This means that the MPC might find that the introduction of forward guidance is more difficult than they would have liked. It could be difficult to preserve the primacy of the inflation target while at the same time providing credible promises that interest rates will remain low for a prolonged period.

“On the face of it these figures imply a further squeeze on household finances, but this is largely a function of these base effects. Month-to-month rises in prices have been more subdued and the squeeze on spending power should steadily ease, particularly given that the improving growth outlook should strengthen workers’ ability to bargain for higher wages.” 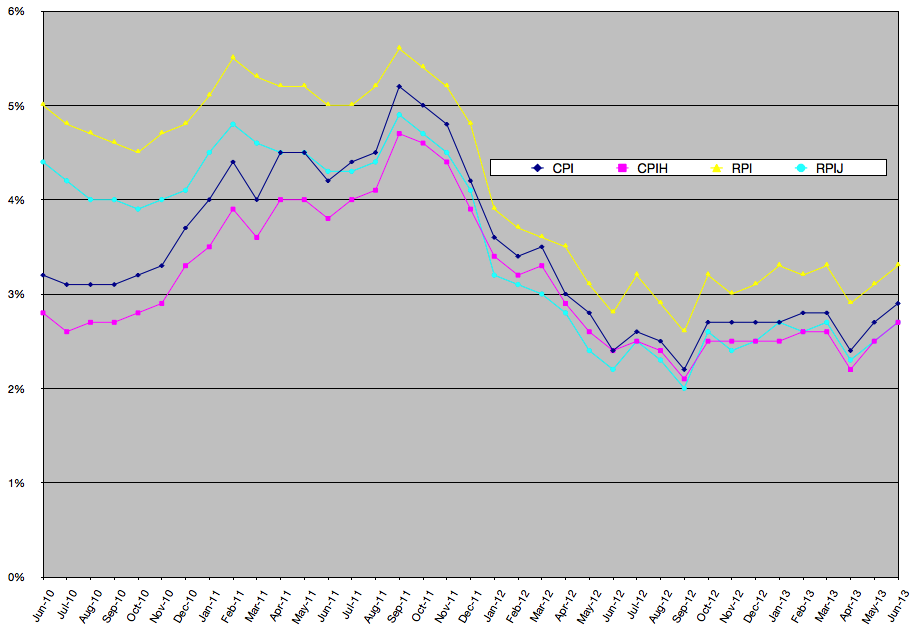 Inflation is a concern to everyone and can be damaging when it is either too high or too low as Carl Hasty of Smart Currency Business explains:

“Inflation is not just a pressure for businesses trading at home – it has a strong influence on the price of imported materials and the profitability of exported goods.

“As we have seen in the UK, the concern has been higher than desired inflation, coming at a time when real incomes have been falling. Yet in many other parts of the developed world, including the US, Europe and Japan, the concern has been deflation, which increases the real value of debt over time – a worrying prospect for already heavily indebted nations.

“The US Federal Reserve chairman Ben Bernanke earlier this month demonstrated just how crucial inflation is to central banks. Sharemarkets fell and the US dollar had a meteoric rise on speculation that US quantitative easing would soon come to an end.

“However, as last week saw, both sharply changed direction after Bernanke said inflation – together with employment – would need to be brought much more into a comfortable range before stimulus measures were wound down, despite a string of upbeat economic data.

“The risks posed by inflation being too high or too low are critical for the short and longer-term health of an economy, and so will never be far from the attention of central banks.

“For SMEs, this means keeping a close eye on the next UK inflation report, as it will be key to the Bank of England’s policy decisions in the months ahead – and hence play a central role in determining the value of Sterling against other major currencies.”

And yet another one: William Cash Jr is UKIP's latest recruit