Paul notes that, after nearly 6 years since the start of the financial crisis, the level of output in the economy is still 2% below its peak in 2008. That suggests to him that "with unemployment still elevated, and diminishing signs of inflationary pressure in both goods and labour markets, we can be reasonably confident that the economy needs to grow strongly for some time to come, to regain a stable and sustainable medium-term trajectory."

Since the introduction of forward guidance, unemployment has fallen "unusually precipitously". Paul welcomes the fall in unemployment, but stresses that, in order to see rising living standards on average, it is crucial to see rising productivity, "which ultimately drives real national income per head and hence how well off we are as a country. So we need to see rising employment accompanied by even faster growth in output." He hopes that faster growth in productivity will arrive and says that if "the UK economy uses up all its spare capacity, without having had a substantial rise in real national income, then we should all be disappointed."

Against this backdrop, Paul explains that: "even if the 7% unemployment rate threshold were to be reached in the near future, I see no immediate need for a tightening of policy. The MPC has been clear all along, that upon reaching the 7% threshold we will have to consider what the medium-term pressures on the economy are and make an appropriate judgement about the direction and pace of policy, and any further guidance that we may choose to issue in future."

On inflation, he highlights the importance the MPC attaches to CPI inflation being back close to its target of 2%. Paul reminds us why inflation is costly but also explains why it was appropriate not to have had tighter monetary policy in recent years, as the sources of the inflationary pressure were thought ultimately not to be persistent and tighter policy would have led to "the threat of deflation and depression, rather than inflation around target and the prospect of real recovery." 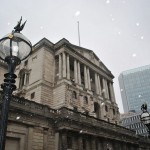 Bank of England by Elisa.rolle

Looking ahead, Paul thinks that "one better feature of the current situation is that price pressures seem to be subsiding, not growing". He observes that: there is no sign of nominal wages over-reacting to falling unemployment; other price pressures also appear to be easing somewhat; and inflation expectations remain well anchored. "Taking the inflationary news together, it would appear that we have a favourable situation in which to explore how much more capacity the economy has, before inflationary pressures begin to build."

Going forward, he explains that "the realistic challenge for the MPC is to avoid a big mistake either by choking off the recovery too soon, leaving the economy in a quagmire, or by allowing inflationary pressures to build excessively, requiring a sharp tightening in interest rates (and the potential for another recession) to bring inflation back under control."

In conclusion, Paul says that "the macroeconomic outlook is much more comfortable than it was – but we still have much to do and much to concern us. There is no room for complacency." With inflation back at target, and the level of output still below its pre-crisis peak, his "own judgement is that we are still some way off the point where it is appropriate to start raising Bank Rate and that when it is time, it would be appropriate to do so only gradually."