Further falls in the prices for both motor fuel and food have caused the Consumer prices index annual rate of inflation to fall from 0.5 percent in December to just 0.3 percent in January says the Office for National Statistics.

The measure of inflation for the UK economy that includes homeowner/occupier costs (CPIH – which is not an official statistic) fell from 0.6 percent in December to 0.4 percent in January.

The annual rate for the old and deselected measure of inflation, the Retail Prices Index (RPI), stood at 1.1 percent in January. The uprated version of RPI, RPIJ, was 0.5 percent in January, which is down on the one percent seen in December. 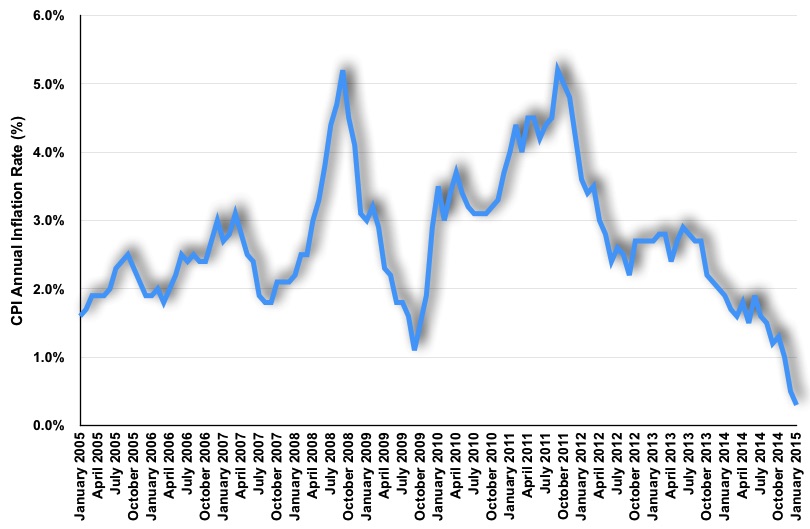 "Following the fall in CPI inflation to a 55-year low in January, a further easing in price pressures looks likely over the next few months. The weekly DECC data suggests that petrol pump prices are currently running around 1% below the January average. The big 6 energy suppliers have also announced price cuts, with the first of these appearing in the January data and the remaining cuts set to take effect over the next few months. Petrol is set to take around 0.6-0.7ppts off annual inflation rates for much of this year, while lower domestic energy costs should reduce CPI inflation by 0.2 – 0.3ppts.

"With today's producer prices data suggesting that the drop in oil prices is continuing to sharply lower production costs throughout the supply chain, these disinflationary pressures should also continue to feed through to consumer prices over the coming months. As a result, it is 50-50 as to whether we see a negative reading for CPI inflation in February. This is indisputably good news for the UK consumer and the recent strong figures for the retail sector demonstrate that 'lowflation' is providing the economy with renewed momentum.

"We support the Bank' that these very low – and very likely negative – rates of inflation are likely to be a temporary phenomenon. Inflation will start to pick up towards the end of the year as the impact of falls in the oil price begin to fade. But we expect core inflationary pressures to remain well contained, given the large degree of spare capacity in the economy. The Bank looks set to wait until early 2016 before raising interest rates and is likely to remain true to their promise of making any subsequent increases 'gradual and limited'."