UK inflation finding it had to unstick itself from zero

Although this is the first month since January 2015 for which the rate has exceeded 0.1%, this
continues the trend since early 2015 of the rate being very close to zero says the ONS.

The rise was mainly due to rising costs in transport, which was offset by by downward pressure from alcohol and tobacco prices as well as food and non-alcoholic beverages. 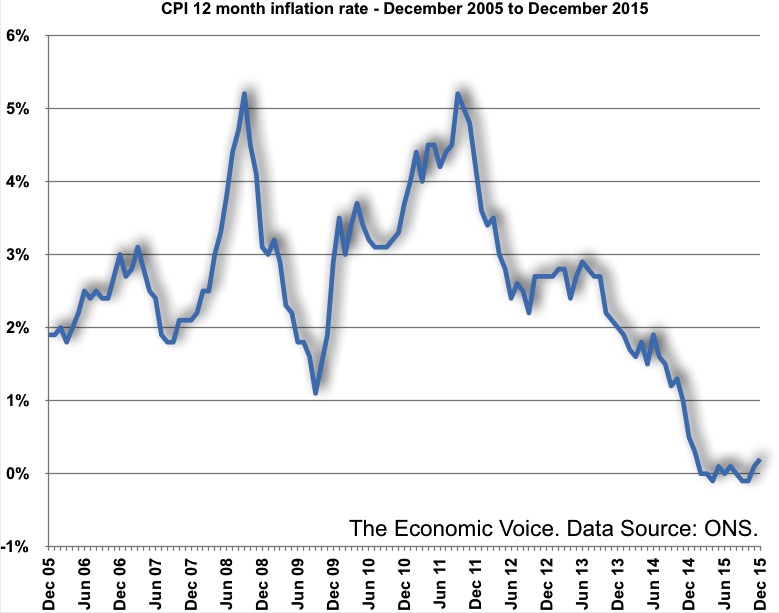 “CPI inflation edged up from 0.1% in November to 0.2% in December, the highest rate for eleven months. We expect inflation to remain below 1% until the latter months of 2016, requiring the Governor to write a further series of open letters of explanation.

“Some of the upward pressure in today’s data came from an unusually strong increase in air fares between November and December, but the main factor was the strong base effects associated with last year’s collapse in the oil price. Even though unleaded petrol and diesel prices continue to drag on inflation, the size of that drag has diminished a little. That said, if the renewed collapse in the oil price over the past few weeks continues to feed through to petrol prices, this will dull the impact of these base effects and slow the rate at which inflation picks up.

“However, today’s producer prices data continue to show disinflationary pressures in the supply chain. While the recent depreciation of the pound should lessen the downward pressures from import prices, this news has been offset by the recent slowdown in wage growth.

“Given the importance that the MPC has placed on the strength of wage growth, tomorrow’s labour market data will have greater relevance to the near-term monetary policy outlook. But today’s data is certainly consistent with our call that the first rate hike will not come before Q4 2016, with the risks being heavily skewed towards a longer period of inaction.”

“Continuing low inflation and a slowdown in growth show the recovery is becoming more vulnerable. The government can’t just cross their fingers and hope for the best. They must do more to secure our future economic strength through investment in skills, infrastructure and public sector pay growth.”

Andrew Chamberlain, Deputy Director of Policy at IPSE, the Association of Independent Professionals and the Self Employed, said:

“The continued low inflation is generally good news for the self-employed. However, IPSE’s quarterly Freelancer Confidence Index has shown throughout 2015 that a high percentage of freelancers are concerned about rising business costs. As they tend to travel longer distances for work than conventional employees, the increase in air fares may add to these concerns.

“Inflation remains barely positive, so it still has a long way to go before reaching the target level of 2% – and is set to average only 1% in 2016. Today’s figures are unlikely to trigger a rise in interest rates any time soon.”

“There was a surprise increase in the Consumer Prices Index today which was against analysts’ expectations, as most in the market were expecting the figure to remain unchanged. The Office for National Statistics said that inflation rose to 0.2% in December, compared to November’s 0.1% increase. The rise was modest and the annual inflation rate is still well within the Bank of England’s 2% target.

“The ONS said transport costs, such as air fares and petrol contributed to the rise and were offset by falls in the price of alcohol, tobacco and food. Although this is the first time since January last year that inflation has exceeded 0.1%, investors should acknowledge that the rate remains low by historic standards.

“Food deflation and the continued decline in the oil price suggest inflation is unlikely to rise significantly for some time which means the Bank of England will be in no hurry to raise interest rates this year. For investors, this means that the case for long term investment in shares remains as strong as ever, with good returns relative to other asset classes."