The latest inflation figures from the Office for National Statistics puts the Consumer Prices Index increase over the previous 12 months at 3.5%, which is slightly up from February’s 3.4%.

The increase in CPI, which is the government’s preferred measure of inflation, will be disappointing to both the government and the Bank of England who have both predicted that it will fall to within the 2% limit by 2013.

The volume of letters from the Governor of the Bank of England to the Chancellor to explain why inflation is so far above target may very soon merit their very own library.

The main drivers pushing CPI up were food, clothing and recreation & leisure. Food was particularly affected by fruit, meat and bread & cereals. With the downward pressure coming from electricity, gas & other fuels and transport.

Food and clothing helped push RPI down but they were held back by upward pressure from motoring expenditure and fuel & light. 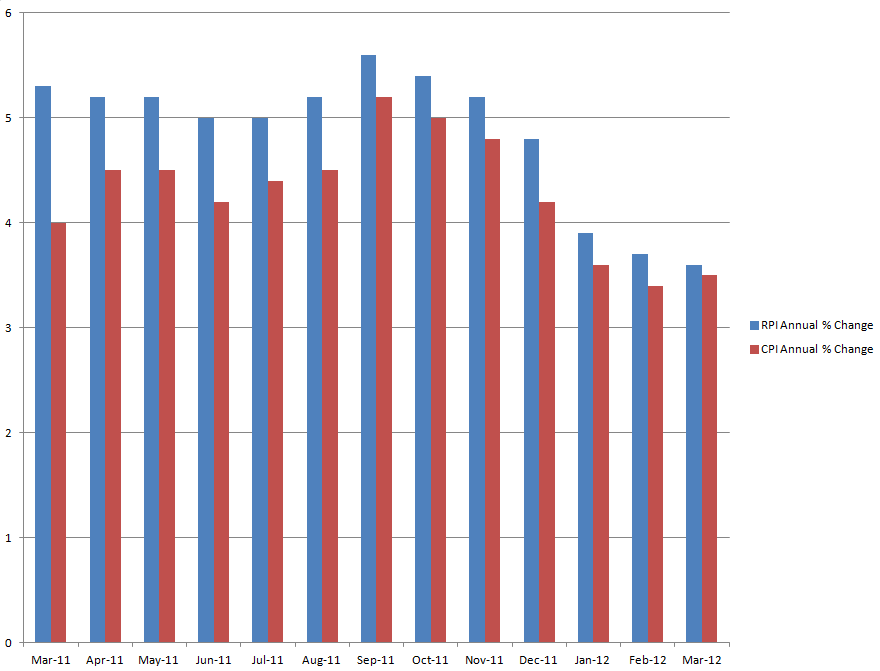 Elevated oil prices have driven petrol and diesel prices to record highs – the price of Brent, the European benchmark crude, averaged $125 in March, up from $120 in February and $111 in January.

Notably, the price of Brent crude dropped below $120 per barrel for the first time in two months on Monday and is holding at just over $118. Most other commodity prices also fell yesterday as China’s disappointing first-quarter GDP data continue to raise concerns about the growth of global demand. Slower global growth this year should help contain further increases of exogenous global commodity prices.

The alcohol and tobacco tax increases announced in the 2012 budget, are likely to be an upward pressure on the April CPI; but, as long as oil prices continue to cool, the annual consumer price index is expected to resume its downward trend.

However, further quantitative easing by the Bank of England is likely to be postponed. The BoE upwardly revised its medium-term inflation forecast in February and is likely to do so again in the quarterly inflation report due out in May. The inflation rate may no longer be expected to slip below the bank's 2% inflation target in 2013.

Higher oil prices are clearly having a major impact and, with retail petrol prices climbing further in recent weeks, inflation is likely to remain high in April too.

Other upward pressures in March came from categories with a history of volatility, which could easily unwind next month, so the outlook for the next few months is likely to be shaped by the movement in oil prices. The move down over the past couple of weeks from the high $120’s to around $120 per barrel is encouraging, but the situation remains delicately poised and any escalation of the political tensions in the Middle East could easily send oil prices higher once more.

These figures suggest that the pressures on consumers remain intense, with inflation still running 2% ahead of pay growth. By now, we had hoped that these pressures would be easing. The longer oil prices remain elevated, the longer it will take for household finances to stabilise and for consumer spending to begin to pick up, and the more damage it will do to recovery prospects.

“We still think it is likely that oil prices will drift downwards, with world demand still fairly weak and the supply premia is likely to fall if the political situation remains stable. Under these circumstances, with underlying pressures still very weak, we would expect CPI inflation to be back close to the 2% target by the end of the year. However, were oil prices to spike upwards and to average $150 per barrel for the rest of the year, we would probably see inflation remaining at current levels or even moving higher.

I don’t think that these figures will have much bearing on the MPC’s decision over QE. The committee has consistently demonstrated that it is happy to overlook high inflation rates if they are driven by temporary factors, which appears to be case.

The resurgence in American energy production