Annual inflation of the Consumer Prices Index (CPI) -. the government’s preferred measure of inflation – was 3.6% in January compared to 4.2% in December. The lowest level for over a year.

The annual inflation of the Retail Prices Index (RPI), which also includes housing costs, was also down from 4.8% in December to 3.9% in January.

The Office for National Statistics (ONS) does point out that the figures are affected by the increase in Value Added Tax (VAT) last January. This placed an upward pressure on prices between December 2010 and January 2011, something that was not present a year later between December 2011 and January 2012. This is an important factor as the annual inflation figures are derived by comparing price changes between two months with the same two months in the previous year.

But this is still well above the Bank of England’s inflation target of 2%, but will give both the government and the governor of the BoE, Mervyn King, some succour on the day that the UK woke up to find itself on Moody’s negative watch list.

But the BoE governor will still find himself penning a letter to the chancellor to explain why inflation is still above target.

Downward pressure was exerted on CPI by:

The government and Bank of England have previously said that they expect the level of inflation to fall back to its target of 2% towards the end of 2012.

You just have to remember that the inflation figures are based on a ‘basket of goods’, which covers items from the basics of food to the luxuries of flat screen TVs. So any increase in the cost of day to day essentials could well be offset in the overall figures by reductions in higher priced items as people de-leverage their lives and put off buying luxury items. 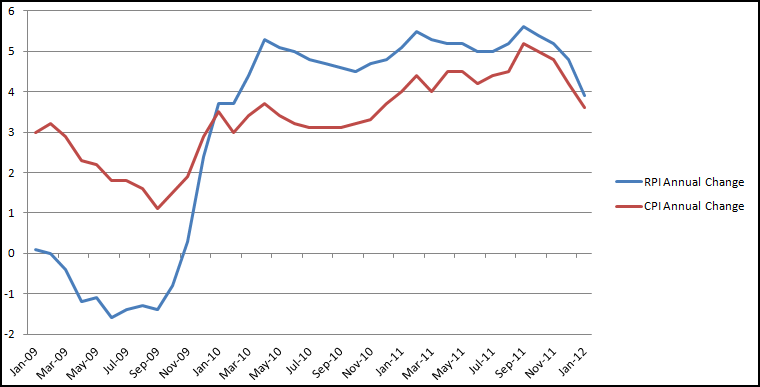 We’ve been waiting for these figures in the anticipation that they would help to emphasise the importance of the temporary factors that kept inflation high through last year. In the event they didn’t disappoint, with sharp drops across all main measures of inflation.

Obviously we’re still some way above the 2% target, which means that the Governor has had to pen another letter to the Chancellor. But given that those letters are only written every three months, this is likely to be the last one for a while. The next few months should see inflation continue to slow, as last year’s sharp rises in petrol prices fall out of the year-on-year calculation, and we should be back below the 2% target by early autumn.

These figures provide the MPC with plenty of leeway to run very loose monetary policy and it would be a surprise if tomorrow’s Inflation Report didn’t show inflation remaining below target for much of the two-year forecast horizon. Looking back, it’s clear that the MPC was overly cautious in the first half of last year, when concerns about a wage-price spiral led some members to vote for rate rises, rather than the additional stimulus that came belatedly in the autumn.

The prospect of much lower inflation is good news for households who have seen their spending power progressively squeezed over the past four years. The benefits won’t be felt immediately, but by the end of this year we expect wages to be growing in real terms once again, which should enable UK consumers to begin to play their part in the recovery.