Ahead of Thursday's Autumn Statement announcement, RICS has called on George Osborne to spell out a clearer plan for the nation's infrastructure priorities. Priority should be given to projects that can deliver the greatest economic benefit, rather than providing immediate funding to those that just happen to be 'next in the queue'.

At present, priority is given to infrastructure projects – such as road and rail maintenance – according to their order in the infrastructure investment pipeline. The result of this being that funding may be allocated to projects with lesser potential to deliver economic returns, purely as they feature next on the Government's priority list. By strategically choosing schemes with greater potential to fuel regional growth, the benefits would be felt more immediately and regional recovery stimulated faster.

Further to this, RICS would also like to see the Chancellor introduce a longer business rate exemption period for empty commercial premises that undergo refurbishment. Empty Property Rates currently only cover premises that are between tenants, not those that are taken out of use for refit, meaning that it is more difficult for existing shops and offices to be brought up to quality and environmental standards. This would also result in more work for smaller, local construction firms.

RICS would also like to see the following areas addressed:

• High street shops should not be subject to business rate reviews within five years of signing their lease. The present system is deterring investment into many town centres

• Getting the regional growth fund 'single pot' allocated to viable schemes, as recommended by Lord Heseltine 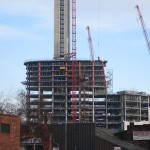 "Good quality infrastructure developments and maintenance projects can bring big economic benefits to the areas that they serve. While it's good that the Government acknowledges this, at the moment, there is no prioritisation in terms of those that can bring about the greatest benefit.

"We would like to see this addressed and projects given the go-ahead based on their economic potential, not merely because they appear next in the infrastructure investment pipeline. While we are seeing green shoots across many of the nation's local economies, there still remain significant areas of the country that could benefit from a property-led recovery.

"The commercial property sector also needs to be looked at. Legislation around business rates is still causing problems for the high street. What we require is regular revaluations to lower the burden on businesses and make the retail sector more attractive to investors."

Pension freedoms one year on: UK pensions 'too complex'