• The combined total of all inheritances received over the two year period was estimated at £75.0 billion.

• Nearly nine in every ten inheritances (88.4%) comprised, at least in some part, of money or savings. Property formed part of 19.5% of inheritances and personal possessions such as jewellery or collectibles were included in 12.4%.

• Rates of inheritance were higher for individuals living in households which already had the highest levels of wealth.

Inheritance – the act of passing on assets such as property, money or personal possessions upon death raises a number of issues, central to public and political debate. The inter-generational transfer of wealth and assets can have a substantial impact on people's lives and those of their families. The following article uses data from the first two waves of the Wealth and Assets Survey (WAS) to improve understanding of recent trends in inheritance in Great Britain.

Numerous factors might lead to changes in the number of inheritances received over time. For example:

– Population projections point towards a growing older population in Great Britain. There are significant costs associated with living longer, whether to maintain a reasonable standard of living, or to pay for care bills. These financial pressures come during a time where incomes are likely to be lower than during working life. Such expenses are likely to diminish, if not exhaust assets which might traditionally have been passed onto others.

– Lifetime gifts, given prior to the death of the person offering the gift, hold a number of advantages over inheritances – namely the potential avoidance of inheritance tax and the ability to offer support when it is most needed. A choice to provide in this way, rather than through an inheritance will reduce the subsequent number of inheritances reported.

– Home-ownership rates have increased across much of the last century, rising from 23% in 1918 to a peak of 69% in 2001. This rise should increase the number of inheritances as more individuals possess a tangible asset to leave to others. 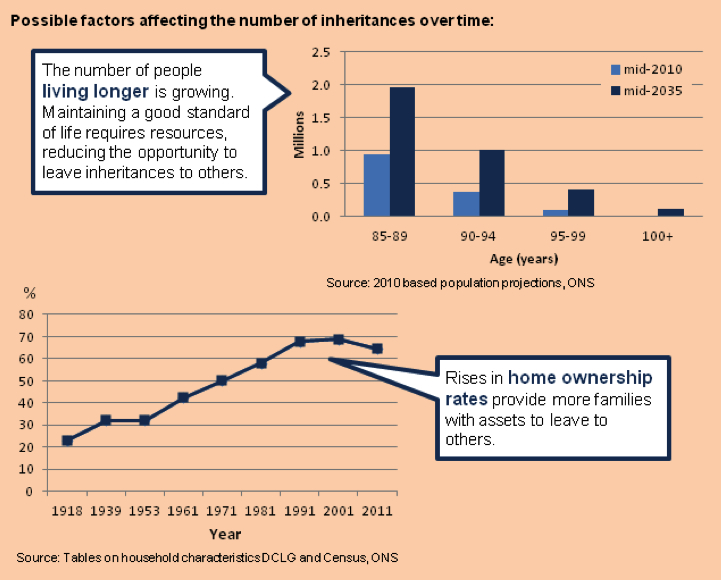 Inheritance reported does not consider all amounts received at any point in a person's lifetime. Instead it only includes inheritances valued at £1,000 or greater and received within the two years preceding the interview.

How Many Inherited and How Much?

The percentage of adults receiving an inheritance valued at £1,000 or more in the two year period was 3.6% – or 1.6 million adults. This result is broadly consistent with a study published in 20081 by the International Longevity Centre (ILC) and NatCen based on the British Household Panel Survey and the English Longitudinal Study of Ageing, which found that between 4 and 5% had received an inheritance during a given two year period between 1998 and 2004.

Knowing how many individuals inherited as well as the value of the assets received is important. Certain inheritances might carry a strong emotional attachment. However, if inheritances are of little financial value they are unlikely to influence an individual's economic wellbeing or subsequent life choices. For example, inheritances of higher monetary value might permit recipients to pay off their mortgage, help children onto the property ladder or fund their university fees.

A tenth of inheriting individuals received no more than £1,000. Half of inheritors received less than £10,000 – but a tenth received an inheritance valued at £125,000 or more.

The combined total of all inheritances received over the two year period was estimated at £75.0 billion.

The Distribution of Inheritance Received

The inheritances received by a small few had a disproportionately higher value than the majority. Figure 1 illustrates that the sum received by one fifth of inheritors totalled £57.0 billion. This accounts for over three-quarters of the overall amount of inheritance received during the two year period. 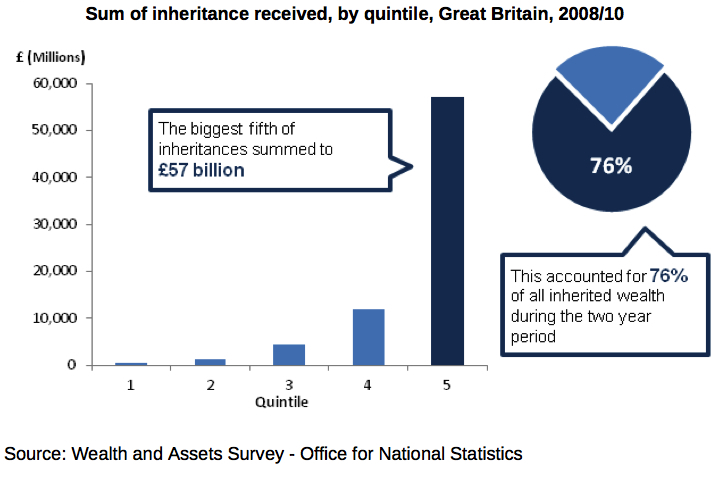 Who left the Inheritance:

Almost half of inheritances (46.8%) came from a parent or parent in law, whilst just over a fifth (22.5%) came from grandparents. A surprisingly large number of inheritances, just over one in ten (11.1%), were received from an uncle or aunt. This finding might be explained by the uncle or aunt not having children of their own. One in 20 inheritors (5.0%) received assets from a non-relative like a friend or neighbour.

The Type of Inheritance:

An inheritance may include one or more items, such as property, money or personal possessions (e.g. jewellery or collectibles) to name just a few. The percentages in the following analysis sum to well above 100% indicating the large number who had inherited more than one item.

Nearly nine in every ten inheritances (88.4%) received were at least some part comprised of money or savings (Figure 2). Just under one in five (19.5%) inheritances included property or land; one in eight (12.4%) included personal possessions and a further 6.5% included stocks or shares.

Action Taken with the Inheritance:

People may keep an inheritance or choose to use it in some way. It is important to remember that recipients here reported only inheritances received within a two year window. Decisions over what to do with the inheritance, most notably where a property was received, might well be different in the short term to the long term- particularly given the economic climate.

The impact of inheritance on self-reported financial situation:

These results demonstrate that a higher percentage of inheritors, compared with non-inheritors, reported an improvement in their financial situation – with the highest percentage amongst those receiving an inheritance of £10,000 or more. However, it is important to note that alongside an inheritance, a large number of other factors could have led to a reported improvement in an individual's financial situation.

The impact of inheritance on net financial wealth:

These results help to demonstrate the role of inheritance in increasing an individual's net financial wealth holdings compared with non-inheritors. However, it must be noted that inheritance alone is unlikely to be the sole driver behind changes in this type of wealth. Other factors including increased savings and the paying off of financial liabilities over the period will also have an effect. Furthermore, comparing changes in net financial wealth here offers just one way to study the possible impact of an inheritance. For instance, analysis looking at the impact of inheritance on other wealth components, namely property wealth and physical wealth, will be important, but were not studied further within current analysis.

Who are those most likely to receive an inheritance:

As a longitudinal study, the WAS has collected information from respondents at one previous wave prior to 2008/10. This allows us to look at, and identify possible characteristics that have led to either an increased or decreased chance of inheriting.

Characteristics associated with an increased likelihood of inheriting included:

Characteristics associated with a decreased likelihood of inheriting included:

– Being male – Rates of inheritance for males were lower than they were for females; a finding which may reflect differences in life expectancies between genders.

– Aged 65 years or older – Compared with those aged 45-54 years, individuals belonging to the older age groups were less likely to inherit. This is possibly a result of the reduced opportunity to inherit from others, as older generations might well have already passed on.

Let's eat of the vatted calf