The Insolvency Service is clamping down on individuals who are disposing of their assets irresponsibly when facing financial stress, rather than paying back their debts, says Moore Stephens, the Top Ten accountancy firm.

‘Dissipation of assets’ is when an individual is considered to have unreasonably disposed of assets without regard to repaying their existing creditors, such as banks and credit card companies. An example might be where the individual has chosen to spend a sum of money received from the sale of an asset (e.g. a car) on a holiday, rather than paying back the debt they already owe.  Another example may be if an individual chose to give away expensive jewellery to friends instead of using it to pay back debt.

Moore Stephens says that BROs can be very damaging to an individual’s ability to borrow and their future business prospects.  If issued with a BRO, an individual’s access to credit can be limited and they can be prevented from becoming a director of a company for up to 15 years afterwards.

Moore Stephens says that it is important for people facing insolvency to be aware of all their obligations, so they can avoid putting themselves at risk of falling foul of the Insolvency Service.

“Tolerance is wearing thin for debtors who shirk their duty to repay what they owe.

“Despite experiencing budget cuts in recent years, the Insolvency Service is making headway in its efforts to crack down on bad behaviour which leaves creditors out of pocket.

“BROs can impact people’s lives for years to come. In addition to their restrictions, BROs can cause reputational damage, as the information about who has been issued with one is publicly available through a court press notice and a register.

“It is important that individuals issued with a BRO know exactly what the restrictions they face actually mean. Breaking them could result in heavy fines or a custodial sentence and therefore if there is any uncertainty they should seek professional advice.” 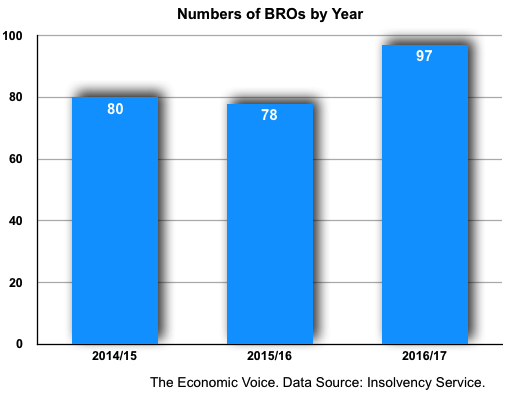