In the last couple of years, most of the industry players always complained about low volatility, boring market movements, easy to predict range trading, etc… But guess what, it is no more those days.

Nowadays every day is a new opportunity, literally. If asked to a Forex trader to define current structure of financial markets in four words you would probably get the following in response:

Let’s start with the first point, instability. Since the Greek elections, number one discussed topic of European economical and political debate has been possibility of Greece Exiting the Euro zone, or in another word “Grexit”. We have been witnessing the troublesome European country shaking the fundamentals of Euro zone. And finally long awaited main meeting between German Finance Minister Schäuble and Greek Finance Minister Varoufakis took place last Thursday. Greek and German finance ministers could not even “agree to disagree”. Germany as literally the cash cow of Euro zone once again put it loud and clear that Greece needs to continue its reforms to improve its competitiveness and should continue to work with troika as per prior agreements. The Greek Finance minister Varoufakis could not even add the Greek debt cut point to the agenda.

As the ECB on Wednesday, prior to German Finance Minister Schäuble’s meeting, announced to stop accepting Greek bonds to finance Greek banks, the pressure on the newly elected Greek government increased. It appears that Greek banks are currently highly instable due to Greek banks’ restricted access to its direct liquidity lines. An official ECB announcement commented the following on the direct liquidity restriction decision: “The Governing Council decision is based on the fact that it is currently not possible to assume a successful conclusion of the program review and is in line with existing Euro system rules.” 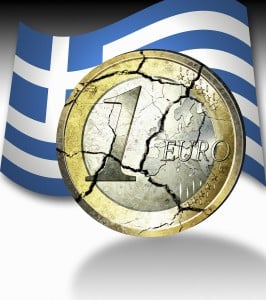 Since ECB’s Greek banking decision uncertainty, started to weight on Euro once again. To be able to avoid a possible “Grexit” the New Greek government need to come up with an agreement and continue to work with troika. With their promises in place from the very beginning, it appears that EU’s and ECB’s pressure does not convince Syriza’s Tsipras to change his mind.

So what change does it make for Greece to be in or out of Euro Zone? Public debt of Greece stands at over 320 billion Euros or 362 billion USD, which translates to about 175 percent of Greece’s National GDP. This makes Greece as Europe’s most-indebted country when measured against output. Additionally, Standard & Poor has also lowered Greece’s long-term credit rating one level to B-, which is a non-investment or junk status. In an official S&P statement on Friday it said that “Greece’s external financing has come under greater stress,” That being said, Greece’s future is uncertain which creates fear not only against Greece but also towards the stability of Euro zone.

The fact that none of the current Greece talks involve the future of the Greek economy or any other important discussions with creditors makes the job even harder. This disorganized and rather chaotic instability in Europe seems that will further push Euro down.

But as we always say, out of every trouble arise new opportunities. This time it is not the trade opportunity, although it exists as every significant market movement becomes a new trade opportunity. The opportunity I am talking about is the opportunity for Russia. As the Russian economy got a hit by the western sanctions due to the Ukraine crisis it seems that they are in search of fresh waters to discover. Most of the Greece’s major decision makers appear to have close connections with Russia. On the other hand Moscow has also signalled Russia’s readiness in principle to help Greece, but I doubt this “help” being a humanitarian. As the Russian money was pushed away of the major EU banks, Greece could be next harbour for the Russian money to arrive, but with a heavy political cost.

For now it is Greece against Europe, but Europe is not the old Europe any more. It is well prepared for the worst but hoping for the best.