Interest in Overseas Property Surged in 2013

Interest in purchasing overseas property surged in the UK during 2013, according to the latest Overseas Guides Company Quarterly Index, which saw overall enquiries for the year increase 33 percent compared to 2012, with growth driven by key European destinations.

Italy and Portugal were the star performers in 2013, both seeing enquiries rise by more than 40 percent year-on-year. These were followed by Spain and France respectively – both of which saw a hike of at least 30 percent – and together continue to be the most popular destinations for property-buyers in terms of volume. Greece saw interest rise by 22 percent, while a fall of just 1.9 percent in Cyprus was encouraging given the negative effects of the country’s banking crisis at the start of year.

The Overseas Guides Company, a free resource for overseas property-buyers, attracted 37,449 direct requests for information, in the form of downloads of its free Buying Guides, during 2013, compared to 28,099 in 2012. The period of July to September recorded the highest number of downloads, namely 10,518 across all countries. Also noticeable was the fall in enquiries for information about long-haul destinations.

“A feeling that property prices in expat hot spots – such as the Costa Blanca in Spain or Algarve in Portugal – began bottoming out in the second half of last year and helped drive enquiries." 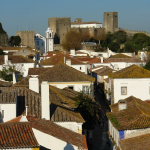 Mr Koutsoudes continued: “The exchange rate played its part too, with the third quarter of the year seeing a dramatic jump in the strength of the pound, from £1/€1.141 at the end of July – its lowest point in the year – to over £1/€1.19 by the end of September – just after people were back from their summer holiday inspired by what they saw in foreign estate agents’ windows. This difference made a typical €100,000 property £3,500 cheaper to a British buyer. Throw into the mix the confidence-boosting effects of a buoyant UK market, cheap euro mortgages and incredible finance deals available from foreign developers, and it’s easy to see where the desire to buy in Europe is coming from. We expect activity to continue to strengthen throughout 2014.”

See below for The Overseas Guides Company’s full set of results for 2013, and comparisons with 2012. 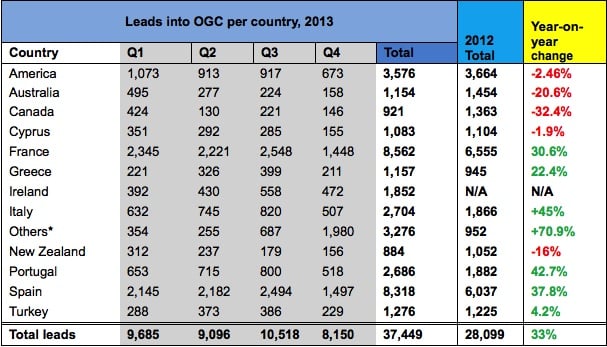