Speaking today at Conservative Party Conference in Manchester, International Development Secretary Justine Greening sets out how international development is 100% in our national interest.

I'm proud to be a member of a party and a government that is cracking on with the job of turning this great country around.

Like everyone else in this room – I would have preferred a Cabinet that was a lot more blue and Conservative and a lot less yellow and Lib Dem.

We all know that Labour left our country in the worst possible state.

I was with George Osborne in his Treasury team that came into Government in 2010 – so I know better than most the state Labour left our nation’s finances.

We’ve come a long way since then, made sacrifices, and we are turning the corner. This Conservative led government is getting things back on track – we have cut the deficit by a third, capped benefits, businesses have created 1.4 million new jobs, cut taxes for 25 million people, and more besides.

And as someone who fought and won a seat off Labour in 2005 I know what comes up on the doorstep is generally what’s happening at home.

But I also know what we are doing overseas matters hugely in today’s complex world.

I’ve never looked at the world through rose tinted glasses but I believe what we do in development is crucial for Britain’s overall approach internationally to be a success.

We are a nation that’s always engaged with the rest of the world, in every sense: culturally, commercially and politically. Britain has always been a country that matters. That’s in our interests. Doing this role I’ve had the chance to see us from the outside, as others do. They have an overwhelmingly positive view of Britain. We have a standing in this world that is unique. It counts for something. It means always being heard in a crowded world at the UN, always being listened to. And critically, as I know from my time in industry before politics, it’s a UK brand that our companies rely on, to open doors to new markets for them.

How do we maintain that vital advantage? Well, international development is a practical part of that approach – alongside a strong defence policy, which we heard about just now from Philip, and skilled diplomacy, which we'll hear about shortly from William.

Last week, William and I were representing Britain at the United Nations. While we were there, we met the US secretary of state John Kerry.

If John Kerry didn't know the Rotherham Yorkshire accent before that meeting, he did by the end of it.

And we talked about our humanitarian work in Syria.

It’s our biggest ever response to any humanitarian crisis and it reflects the scale, despair and brutality of the situation. The face of this Syrian crisis is a child’s face. Out of school, traumatised.

Our humanitarian work for Syria is about helping ordinary people – who led lives we’d recognise but they have now lost everything.

When I’ve had the chance to meet them, in camps and communities in Lebanon and Jordan, I’ve met proud people, they’re not looking for handouts, but they do want their lives back. And we should support them until that happens.

We’re not a country that just stands by or looks away as people have their lives shattered through no fault of their own.

When people in need call out to the international community, to the world for help, Britain should be one of those countries that people can count on. And I am proud that we are.

I’m also proud of what we're achieving when it comes to tackling three big killer diseases: AIDS, tuberculosis and malaria. Our investment in the Global Fund is saving literally millions of lives with the help of the British people. One life saved every three minutes over the next three years.

And for many developing countries, healthcare is as much about economic productivity.

In a country like Ghana, if you get malaria during the year, and your family does, it’s like being badly laid up with flu, only not just once during the winter, but every other month – you get it, your children get it. It can be fatal. And aside from the strain on the health system, a family in Ghana, will spend 30% of household income on the medical costs of treating malaria.

For businesses with a workforce that’s often sick, it’s a productivity issue too. So if we can reduce malaria, we increase economic productivity. That’s why the UK announced last week that we are stepping up our Global Fund investment in malaria, ADS and TB with people like Bill Gates. He’s not someone who invests for the sake of it and neither am I – we invest, because we both know this pays back.

He expects results and so do I. 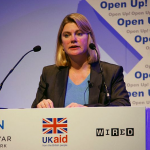 As a former Treasury minister I'm not interested in schemes or programmes that fail to make a long term dent in extreme poverty. And I’ve taken decisions to exit aid programmes in countries that are successfully developing and able to invest for themselves, like India and South Africa

That’s also why one of my top priorities is investing in girls and women. That investment delivers some of the best returns of any development programmes – when a girl gets education she marries later, has fewer children, and the children she does have will be healthier. When she can earn extra income, a woman will reinvest 90% of it in her family and community.

It may sounds boring to non-accountants out there, but I’m proud that in procurement, last month my department won the annual award for the Best International Procurement from the Chartered Institute for Procurement and Supply

This is the kind of stuff I’ve been getting to grips with, driving up value for money and driving out waste.

But it's not just about a value for money approach to Britain’s commitment to being there for humanitarian crises and being part of the effort to defeat the global diseases that hold countries back.

We also target our efforts to reduce conflict, boost the rule of law, to make Britain safer at home and ensure that we can get on with trading with and travelling around the world.

That's why I sit with William Hague, Theresa May and Philip Hammond on the Prime Minister’s National Security Council.

What the Prime Minister has called the Golden Thread is about building good governance and the institutions that make fairer, more productive and more stable countries.

In other words, countries where people can go about their business in peace without having to flee violence or poverty.

Our work in Somalia is a case in point. It's a country under siege from the terror group Al Shabaab – a group that the Government of Somalia has been fighting with our help. It’s closely affiliated to Al Qaeda. If you didn't know of Al Shabaab before the recent atrocity in Nairobi, you sadly do now. It shows you what they’re up against.

We are helping train their police force, rebuilding Mogadishu’s crumbling prison and developing their criminal justice system to contain that terror threat as much as they can.

Similarly in Yemen, Alan Duncan has led the way working with that country’s government to keep their country stable and secure.

It can’t ever make sense to allow terrorists to flourish overseas, and to reach our shores before we do something about it.

It’s sensible to tackle these risks at source.

Its overseas aid with a tough objective. In this case, being involved early so that our soldiers don’t have to be.

And key to a stable, successful country with prospects is a thriving private sector, jobs and businesses, trading with Britain and the rest of the world.

I don't want countries to continue indefinitely being dependent on our aid. I never have. I want the opposite – an end to aid dependency through jobs.

That’s why we’re helping developing economies grow faster but can we be smarter about the UK locking into the business opportunities those emerging economies present? Yes. That’s why the work I’m now doing with British industry – the retailers, infrastructure companies, London Stock Exchange, oil and mining companies to name a few – has the chance to be a real win/win, helping developing economies grow but with responsible investment from our British companies aswell.

Seven of the 15 fastest growing economies in the world are in Africa. Africa may still have immense challenges, but it is a continent now in transition.

China has transitioned significantly, lifting millions out of extreme poverty on the way – their purchase of our cars built here is one of the reasons our car industry is a net exporter for the first time since the 1970s.

So development doesn’t just develop their economies, it develops ours too.

28 chief execs of some of the UK’s biggest companies wrote to the Financial Times earlier this year to make this very point. As they know, relationships count in business. We can be building those relationships early in the next wave of emerging economies, or we can start building them late after others are already there. We’re not the only ones who see this clearly, for instance, my Dutch counterpart’s department covers International Development and Trade.

But I can assure you that meeting this manifesto promise, our 0.7% is 100% in our national interest.

It might feel like the easiest thing is doing nothing. To turn our face away from extreme poverty and hardship, to ignore the instability, ignore the effects until they reach our shores, to not worry about getting into emerging markets until they’d actually emerged, but that’s not sensible.

And in an ever more joined up world – To those who say “stop the world I want to get off” that’s not an option. So reaching out, shaping our world has never been more important.

We are a country that looks out to the world and shapes it. We don’t just sit back and wait for events to shape us.

Britain is great because our values, our institutions do stand for something that is real that others want to share, we have a history that means we’re unique in having our Commonwealth.

And at the end of the day, helping people provide for themselves, building opportunity, growing trade markets, keeping Britain safe and getting a headstart in the global race.

That sounds like a Conservative agenda for international development to me, and that’s exactly what I and your Government are committed to achieving.

The FCA Appoints Adviser On Wholesale Banking And Investment Management