As we pass the seventh anniversary of the Lehman Brothers bank collapse, Graham Spooner, investment research analyst at The Share Centre, looks at how this has affected investors.

“This week sees the seventh anniversary of the collapse of Lehman Brothers. Hardly something to celebrate, the bank’s breakdown acted as the catalyst for much of 2008’s financial crash. British banks were hit hard and have been on a long, slow road to recovery. The sector was a favourite for private investors geared toward income; this for the most part disappeared and is still some way short of past returns.

“At The Share Centre, Lloyds bank remains the most widely held share, followed by Barclays in 8th place, RBS at 10th and HSBC at 13th. This may be down to long-suffering investors who held them over the crisis and then took the view that these companies would recover over time. Alternatively, new investors may have taken advantage of the comparatively low share prices also with the expectation that recovery would follow. 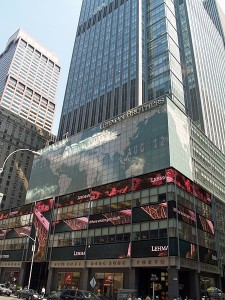 “Within banking, the second half of 2012 into 2013 saw good gains for the sector. Since then, the recovery has somewhat stalled on the back of problems in Europe and the seemingly never ending barrier of regulation and fines for past misdemeanours. Lloyds, Barclays and RBS share prices have trended sideways, while HSBC has seen further falls, as emerging market concerns grow.

“The huge amount of restructuring the sector has undergone, involving selling off parts of the business and aggressive cost cutting measures, has seen revenues fall along with profits. Those interested in investing in the sector should note that recently, the decline in profits has started to reverse, up 60.2% over the last year, but still 44% down on their pre-Lehman 2007 level.. A number of fund managers remain happy to be underweight, whilst others appear to be taking the view that there is potential value to be found in the sector. Perhaps taking the stance that while finding returns in the current environment of low interest rates is challenging for banks, that situation is about to change and allied to all the cost cutting and improvements to capital base, there may be some longer-term gains to be made.

“Although this is not an anniversary to be fondly remembered, and one which is perhaps best left to future economics students, there are some lessons for investors from that collapse. Looking ahead for the sector, there will be the government sell off of its final holding in Lloyds and eventually RBS. Challenges do however remain, not least those of private clients still lacking confidence in the big high street banks.”