On Sunday 24 September, Germany will be heading to the polls to take part in the federal elections.

Ahead of polling day, the Association of Investment Companies (AIC) has collated comments from investment company managers with exposure of 10% or more in Germany to hear their thoughts on the impact of the upcoming election on their portfolios and the market, the outlook for Germany, as well as where they are finding value.

George Cook, manager of Montanaro European Smaller Companies said: “If investors have learnt one thing in the last few years, it is that you shouldn’t trade on politics.  Many investors burnt their fingers trying to be clever around political events such as Brexit, the Italian referendum and the US election. 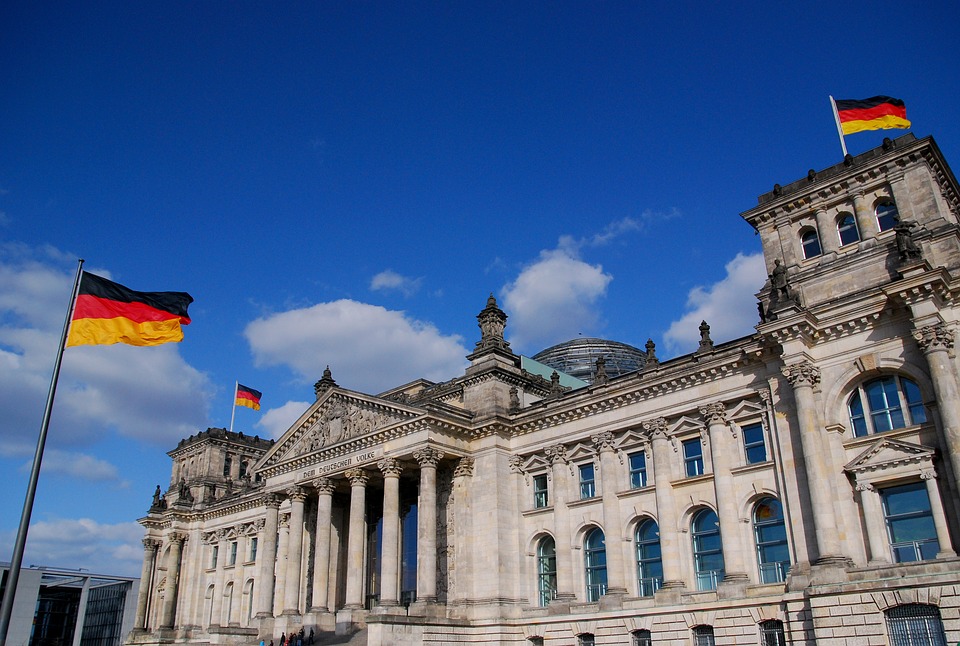 “Despite the sometimes surprising results of these events, markets in the UK, Italy and US rose strongly once the votes had been counted.  It seems that the market worries about politics in the run up to elections and then realises that the world is not about to end once the results are announced.  This is great for stock pickers such as ourselves who do not trade on politics, as investor sentiment can drag down the price of very good businesses, allowing us to pick them up cheaply.”

Stefan Gries, co-manager of BlackRock Greater Europe Investment Trust said: “The political risk premium in Continental Europe has come down significantly since the French election. As it stands, we believe the outcome for the market if the election follows polls will be benign. Overall in the context of receding political risk, improved economic momentum, and better earnings outcomes across the region, we believe the attraction for European equities is well underpinned.”

Sam Morse, portfolio manager of Fidelity European Values said: “The German election can be expected to have a modest impact on the economy and businesses, with current polls making any radical change unlikely. This being said, over that past few years political shocks (the latest being the UK election) have not pushed the market off its pedestal. I believe the ultimate driver of markets, in aggregate, is more straightforward: the real dividend growth of companies, and this is what I will continue to focus on.”

Tim Stevenson, manager of Henderson EuroTrust said: “The German Federal Election on the 24 September is likely to see Chancellor Merkel’s coalition returned in some form or other. With elections in France, Hungary and the Netherlands earlier this year seeing a broad rejection of the alt-right, anti-EU movement that has dominated recent media coverage, Europe’s leaders should – at last – have some breathing space.

“Much of the criticism levelled at the EU in the lead-up to the UK’s Brexit vote was, in our view, justified, and some of these issues are now openly being discussed. Turkey, for example, came up in the live televised German election debate between Merkel and her Social Democrat rival Martin Schulz, with Merkel taking the unexpected step of promising that she would try to end discussions over Turkey’s EU accession. There are plenty of other matters on the agenda, and it will be important to see how France and Germany can work more closely together in future.”

Alexander Fitzalan Howard, co-manager of JPMorgan European Investment Trust said: “The German economy remains in good shape. We expect GDP to grow approximately 2% this year. Employment is strong. The current account is in surplus. Bond yields remain low and companies can finance themselves cheaply. Corporate earnings are recovering along with the rest of Europe. So far there is little sign of inflation accelerating. However, at the margin, the recent strength in the Euro is a negative for Germany’s export orientated economy and it is perceived as being vulnerable to any slowdown in China.”

Stefan Gries, co-manager of BlackRock Greater Europe Investment Trust said: “As bottom-up stock pickers, our country exposure within the BlackRock Greater Europe Investment Trust is a result of fundamental stock selection. However, we maintain an awareness of the macro environment and an acute knowledge of market construct. The German market, as the largest exporter within the euro area, is incredibly international in nature. Consequently, many companies within Germany have a high level of revenues denominated in non-Euro currencies. As a result of increasing Euro strength, it is possible the translational impact of this foreign revenue will weaken the earnings position of these companies.

“In addition, the German listed market is the most exposed of the European markets to the auto sector. Recent evidence suggests the auto cycle in major markets could be rolling over, with like-for-like vehicle sales down over -15% year-on-year in the UK, and -6% in the US to end of July. China, where car sales have increased almost 5-fold since 2006, remains more resilient, however consumer preference is for domestically made vehicles rather than German engineering.

“Positively for the German market, economic growth remains resilient and business confidence surveys continue to be robust. German companies on the whole also boast healthier balance sheets compared to the rest of the euro area; according to euro area statistics the German corporate debt ratio stands over 40% lower than the euro area average.”

George Cook, manager of Montanaro European Smaller Companies said: “Our trust owns Rational, the leading kitchen equipment manufacturer.  The company continues to grow strongly as professional chefs realise the benefits of Rational’s ovens, which increase cooking efficiency and save space in kitchens.  Growth is dependent on the further penetration of their products across the globe, with a particular focus on Asia and North America.  The company is German listed, but it is not just a German story.  Indeed, about 120 million meals a day are produced by Rational equipment all over the world.

“Similarly the success of German aircraft engine manufacturer, MTU Aero Engines, depends not on the fortunes of Angela Merkel, but the progress towards “Clean Sky” regulation which should increase the tailwinds behind their less noisy and energy efficient engines.

“German stocks may trade lower as nervous investors fidget in the run up to the election, but we will continue to appraise companies on their bottom up fundamentals.”

Alexander Fitzalan Howard, co-manager of JPMorgan European Investment Trust said: “In general we like cyclical companies that will benefit from this growth, both domestic and global. For example, we own a position in the chemical company Covestro that was spun out of Bayer. In the small cap end of the market we hold Jost Werke which sells safety critical products, such as fifth wheels, king pins and landing gear, for the truck and trailer industry. Sales are enjoying a cyclical pick up in the US and strong growth in China driven by tighter regulations.

“As both iPhones and cars become increasingly complex we particularly like semiconductor companies that are exposed to this. As electric and autonomous vehicles become more prevalent Infineon will be a key beneficiary. Dialog Semiconductor is a key supplier to Apple and is exposed to the upcoming launch of the iPhone 8 and X.

“Other interesting holdings include SAP which is successfully rolling out its S4/HANA and cloud products leading to higher margins, and Evotec which conducts research for pharmaceutical companies.”

Investment companies with 10% or more total assets in Germany 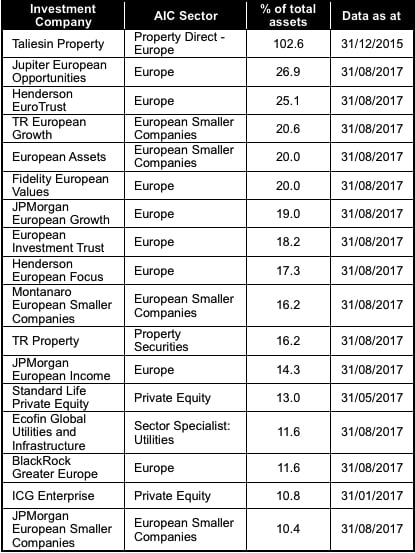