The investment company sector has broken the Â£100 billion milestone for the first time, according to figures released today by the Association of Investment Companies (AIC) based on estimated data from Morningstar. Total assets under management reached Â£100.8bn at 31 January 2013, the highest ever.

Ian Sayers, Director General, Association of Investment Companies (AIC) said: “It’s very encouraging to see the industry’s assets at record levels, passing the Â£100 billion milestone for the first time.Â  It’s also striking to see how much the sector has changed over the last decade, with the Infrastructure and Commodities & Natural Resources sectors now represented in the AIC’s top twenty largest members.

“With the industry 145 years old and counting, those companies that have stood the test of time continue to hold as much relevance today. However, the changes in our top twenty members over the decade demonstrate that this is a dynamic, evolving sector using the closed-ended structure to allow investors access to asset classes that other funds can’t offer.

“Whilst hitting the Â£100bn mark shows the health of the sector, long-term performance is still the most important measure of success and the sector continues to have an impressive story to tell.”

Two of the twenty largest AIC members today are in the Sector Specialist: Infrastructure sector, HICL Infrastructure and International Public Partnerships – a sector which didn’t even exist a decade ago. BlackRock World Mining from the Sector Specialist: Commodities & Natural Resources is now amongst the AIC’s largest members, whilst a decade ago this sector did not feature amongst the twenty largest members.Â  Aberforth Smaller Companies from the UK Smaller Companies sector now features amongst the top twenty members, whereas ten years ago this sector was not represented.

Today four of the AIC’s twenty largest members are domiciled offshore, but ten years ago there were no offshore members in the top twenty.

Despite some significant changes to the shape of the investment company sector, some of the core sectors are still very much holding their own.Â  Whilst a decade ago, eight of the AIC’s largest members were in the Global sectors (Global Growth and Global Growth & Income), today nine companies from these sectors feature amongst the AIC’s twenty largest members. 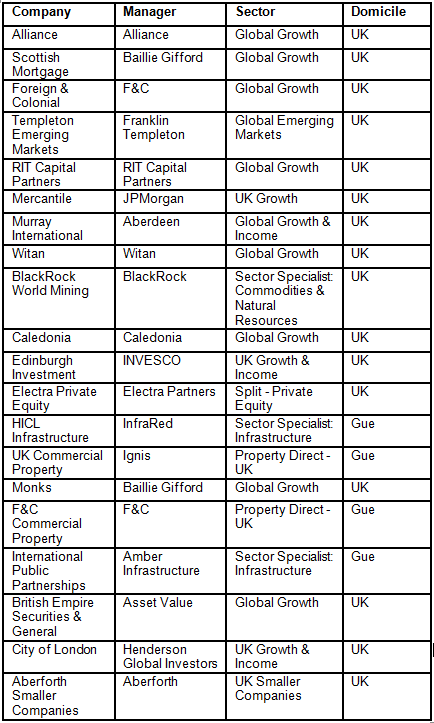 Should general practices open for longer?

No EU referendum for you says Cameron’s aide Laurence Mann