I admit I've seen tops in the S&P for quite some time.  For many reasons e.g.:

1. JPY troughed v USD in May – I guess I expected a bounce back, instead we have had this coiling

3. Prior fast moving tech stocks (e.g. TESLA, NETFLIX etc.) have been topping and pulling back sharply

4. USD has been hammered since the Summer (when for the last 2 years it has risen as has the S&P) 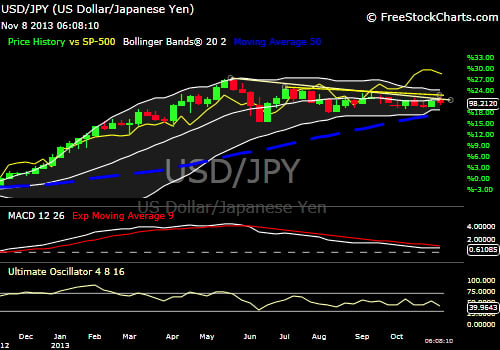 Weekly shows coiling since May, after massive fall in ¥ – Click to enlarge 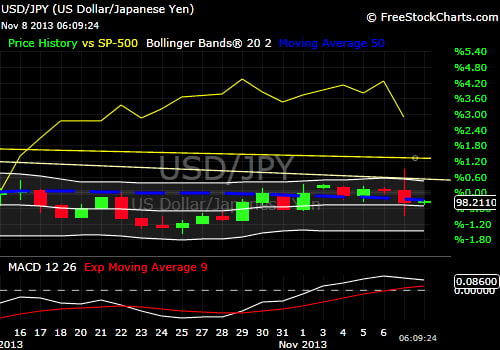 However, I am saying it again.

The JPY:USD seems to be playing a most important role in global equity prices.  As JPY plummeted from last October, equities soared.

Look at the NIKKEI and the JPY.  You will see they are mirror images – JPY down, Nikkei up.  JPY coiling, Nikkei coiling.  It's quite a sight.

So what happened yesterday to make me write this post?

The Euro area is so strong, economically, that the ECB decided to cut interest rates.  Let me put that another way, the Euro area is seen to be the basket case it obviously is but for the lies of the establishment and the bankers.

So, the USD, at first, soared then fell against most currencies.  The USD has been strong these last couple of years as funds flowed into the US from the EU and Emerging Markets.  These funds went into US stocks.

So, is it the case that the ECB cut rates and the USD cannot hold its rise?

If so, then the USD may fall, generally, and the JPY will rise v USD.  The Nikkei will fall as will the S&P (and associated indices).  Also, EMs may rise as their currencies strengthen, relatively, even if S&P falls.  However, on very recent evidence that is unlikely.

Also, if USD falls, then precious metals should do well.

Also, we saw lots of buyers come in for US Treasuries and this further indicates US Treasuries still rallying, from low levels a couple of months ago.

Big picture I am saying there are strong reasons why investors should be very cautious about expecting more and more equity gains.  If it falls and it breaks important support at circa 1620 and then major supports at circa 1550 then watch out below.

I am saying precious metals may be in line for a significant rally.  I would be surprised if we have seen THE bottom but we may have seen A bottom. NB though. If Silver breaks below $20 and Gold below $1,250 then likely we're still heading way down.

Whether or not we've seen the bottom, a buy of a generation is coming.  It may be here now (with a possible rally) but more likely it's in 2015 or so.

I am saying the USD may be at risk here of continuing its downtrend, started this Summer.  I am not clear on the USD, generally.  I see both sides, short term.  I guess if JPY soars v USD then that may be the decider.  Longer term, if there is a major global economic shock (eg China – to be subject of future post) then USD would normally soar.

I am saying IF JPY strengthens, short to medium term (i.e. weeks to months), then the Nikkei may fall considerably.  That would set up the buy of a generation from much much lower levels (10,000-11,000?), though you'd have to hedge out the currency risk for the longer term.

So, the risks are there and the opportunities too.  Understand that markets are inter-related.  Some go up and down because others go up and down, normally. Some go vice versa, normally.

But clarity eventually arrives along with sensible markets movements.

WHATEVER, PLEASE MAKE SURE YOU ARE REVIEWING YOUR INVESTMENT HOLDINGS RIGHT NOW AS THE CYCLE OF 2009 TO DATE MAY BE ENDING.

See more from Jonathan's blog "You Couldn't Make It Up"

So much for a quiet summer….