With the Federal Reserve-related turmoil of the summer behind us, we believe the outlook for the Chinese economy and the companies operating in China looks better. Supportive central bank policy and fresh reforms by the Chinese government, such as the removal of some business taxes to spur expansion among small and medium-sized enterprises, means that, in our view, there is the potential for improved performance for the China bond market.

At the start of the year we had expected the renminbi to rise against the US dollar, and this has so far been realised. We believe that the bond market remains well supported thanks to the growth in the Chinese economy, with the official target of 7.5% annual growth for the year expected to be reached.

In terms of the duration, or the average weighted maturity, of assets held, we hold bonds in the range of two-year to ten-year, with an average duration of three years. In sector allocation, we still prefer high grade banks over domestic financial companies, as at the beginning of the year, with a preference for banks because of the quality of the loan books and the significantly enhanced regulatory environment. In particular, we continue to seek out high quality companies in the Financial sector that have not been affected by the shadow banking issues that have afflicted some companies in this sector.

At the beginning of the year, we had a concentration in the Property and Logistics sectors, but we have since diversified it into Petrol and Chemical firms, as signs of broader economic growth became more apparent.

The recovery in developed economies has boosted the Chinese economy as well, and this has led to an increase in the number of good quality companies from outside China that are issuing bonds denominated in renminbi. Examples of these that the Fund has invested in are BP, the UK oil giant, and SK Global Chemical, a branch of the South Korean conglomerate SK. The entrance of more non-Chinese companies should boost liquidity, and is an indication in our opinion that global firms now have more confidence in the Chinese bond market.

See Figure 1 below: Current sector breakdown of the Baring China Bond Fund (Click the graphic to enlarge it). 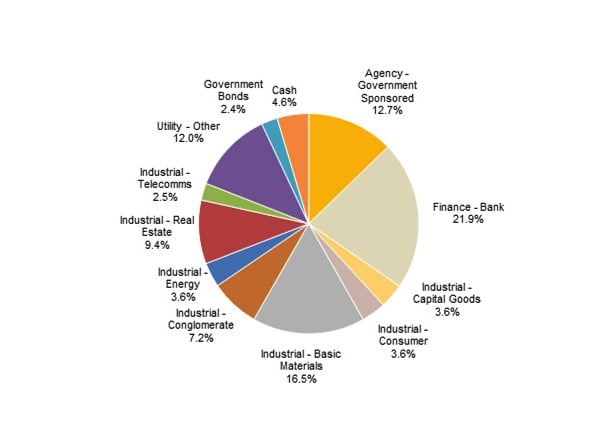 In addition to this, we continue to see investment opportunities in US Dollar-denominated bonds of Chinese companies, as this broadens out the investment universe. When making an investment decision on these companies, we currently see potential opportunities among those with higher yields. The currency exposure on bonds is then hedged back into renminbi. With the Federal Reserve not expected to make any changes to policy until February or March 2014, in our view, some of the uncertainty surrounding the direction of US monetary policy has been removed

New policies and reforms in China itself will also help to boost economic growth in 2014, in our opinion, with the government continuing with its stated objective of boosting domestic consumption. We believe that the environment will be supportive for the Consumer Discretionary sector, and there are currently a number of interesting investment opportunities here.

We believe that the outlook for the Fund (which currently has a gross redemption yield of 3.58%*) is positive, given the reforms and policies being enacted by the Chinese government, which should provide additional support to the credit market. In general, we continue to prefer corporate bonds to government debt, and see particular opportunities among higher yielding bonds at the moment.

Three Ways to Prevent Irrationality from Entering Your Portfolio