Almost half of the rise in employment since 2010 has been in temporary work, according to a TUC analysis of official figures published yesterday ahead of the latest unemployment figures out tomorrow.

The TUC analysis of the labour force survey shows between December 2010 and December 2012 the number of temporary workers increased by 89,000 to reach 1,650,000 – nearly half (46 per cent) of the total rise in employment.

The UK's temporary workforce has been growing for a number of years, increasing by 230,000 since 2005. Over the same period the number of permanent of jobs has fallen by 8,000.

The most common form of temporary work is contract or fixed period work, though the number of people doing these jobs has fallen by 19,000 over the last two years. In contrast, casual work – for example, someone who is not part of the permanent workforce but supplies work on an irregular basis – has been the fastest growing form of temporary work, soaring by 62,000 in the last two years alone.

The TUC believes that the rise of involuntary and casual temporary work, along with increases in involuntary part-time work and zero-hours contracts, show that beneath the headline employment figures lies an increasingly insecure, vulnerable workforce. Too many workers are not working enough hours to get by, or have no guarantee of paid work from one week to the next, says the TUC.

A recent report from the TUC also found that four in five new jobs created since 2010 have been in industries where the average wage was less than Â£8 an hour. This shows that many new jobs are not only insecure and short-term, but are likely to be low paid too, says the TUC.

The increased casualisation of the workforce is bad for workers, who are likely to earn less, and are unable to progress their careers or plan ahead. It is also bad for the economy as low-paid, insecure work is less productive and holds back consumer spending power.

But rather than helping people who are stuck in short-term, insecure jobs, the government is making their working lives even tougher, says the TUC. Ministers have cut basic rights at work, made it easier for bad bosses to mistreat staff without fear of legal redress, and are now considering making it even easier to sack people. 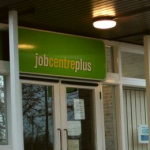 Job Centre Plus by Cmglee via Wikimedia Commons

The TUC warns that unless the government takes steps to encourage better working practices and the creation of good quality, permanent jobs, workers across the UK will get trapped in low-paid work with poor career prospects, and their living standards will continue to fall as a result.

TUC General Secretary Frances O'Grady said: 'Unemployment has been lower than originally feared when the recession hit. But beneath the surface lies an increasingly insecure and vulnerable workforce.

'Millions of people have taken shorter hours, temp jobs and zero hours contracts in order to stay afloat during the recession and stagnation. But while poor pay and no career prospects may be better than the dole, these kind of jobs will not raise living standards or create a meaningful recovery for most people.

'The fact that casualised labour continues to grow even during this 'so-called' recovery suggests that the labour market is far more fragile than headline figures suggest.

'Ministers need to acknowledge the problems of under-employment and insecure work, as it is eroding people's living standards. Cutting basic rights at work and making it easier for bad bosses to mistreat staff will only make things worse.'

Banks to start bringing operations back to the UK says Certeco