View from the dealing floor.

From April until the beginning of August, AUD has continuously retraced to a level of 0.8850. It took six weeks for the AUD/USD pair to climb above 0.9290. Throughout June and July the pair struggled multiple times to break through this level making it a significant resistance level. As often seen in these cases, the fx pair retraced to this level at the beginning of October adding emphasis and ultimately making a significant support level.

Subsequently, the pair bounced higher to reach a five month high of 0.9758 later in October, before reversing again. Last week’s European Central Bank (ECB) decision to cut interest rates by 25 basis points combined with a much stronger non-farm payroll reading of 205,000 instead of 125,000, have added to the pressure and pushed the pair well below 0.9400. 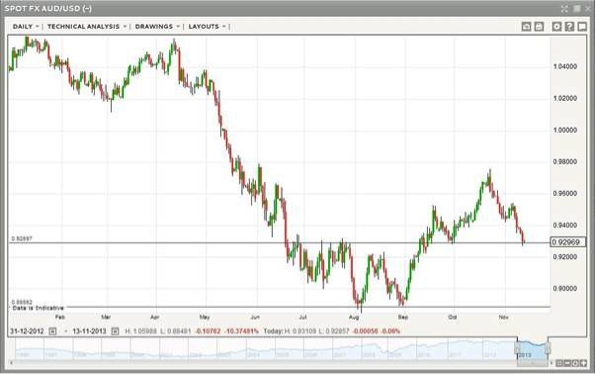 Last week saw a change in sentiment towards the dollar with many anaylsts stating a possible continued period of strength for the greenback. This leads to renewed emphasis on 0.9290 as the next support in place. On Tuesday the pair shortly broke through the level, however, retraced higher and is currently around the 0.9300 mark.  If 0.9290 is broken, the door may be open for a further move down. However, this depends if the dollar momentum can be sustained. After last week’s major news releases, this week there should not be any major surprises. An exception could be on Thursday when Ben Bernanke is scheduled to speak as well as his successor Janet Yellen. However, the tone of the Federal Reserve with respect to QE is not expected to change at this point in time and will likely stay this way until after March 2013.

Additionally, Australian exports have suffered significantly due to the expensive Aussie dollar. Hence, leaders in various industries, especially the ones reliant on exports, are struggling to meet their targets. For instance, the national automobile industry is suffering and set to lose further market share (currently at only 10%). GM just informed Holden that manufacturing in Australia looks dim, endangering over 1700 jobs directly and many more indirectly.

The pressure of the economy could be counteracted by policy changes of the Reserve Bank of Australia (RBA).  Nonetheless, in comparison to other institutions around the world such as the ECB or Federal Reserve, the RBA is not known for intervention unless triggered by a major event.

This information has been prepared by IG Markets Limited. ABN 84 099 019 851, AFSL 220440. We provide an execution-only service. The material on this page does not contain (and should not be construed as containing) personal financial or investment advice or other recommendations, or an offer of, or solicitation for, a transaction in any financial instrument, or a record of our trading prices. No representation or warranty is given as to the accuracy or completeness of the information. Consequently any person acting on it does so entirely at his or her own risk. The information provided does not have regard to the specific investment objectives, financial situation and needs of any specific person who view it. IG accepts no responsibility for any use that may be made of the comments and for any consequences that result.

Think before you apply for a loan