Is Carney the wrong man for the Old Lady?

When Mervyn King finally stepped down as Governor of the Bank of England, most people in the City of London breathed a huge sigh of relief. At the start of his tenure, King was completely uninterested in the Financial Stability side of the Bank, and put all his energies into monetary policy, as he had done in his previous BoE roles.

When the crisis hit, it was deemed too risky to replace him in the midst of the turmoil, and he limped on throughout his second term. While King was bold in some respects – quantitative easing being a case in point – he never grasped the fact that good central bankers are very different from good academic economists. The City hoped for a new Governor with a better understanding of financial markets and risks; and insiders at the bank, from what I hear, were hoping for someone without an ‘iron fist’ approach to analysis and decision making.

When Mark Carney was announced as the new Governor, many people – including myself – were pleasantly surprised. George Osborne had definitely pulled a rabbit out of the hat, and the initial signs were very encouraging; Carney immediately seemed to offer a more human and conciliatory approach. Here was someone who could safeguard the economic recovery with monetary policy; rigorously enforce the new macroprudential approach; and implement a root and branch change at the Old Lady, to transform the culture.

Carney has now been in the job less than a year. But many people’s perceptions have already shifted dramatically.

On monetary policy, he has created lots of confusion for little benefit. The original form of forward guidance – tied to the unemployment rate – was bold, clear, and technically brilliant, neatly encompassing the massive uncertainties about potential supply. Unfortunately, the 7% threshold was bonkers, and the Bank’s forecasts remained as resolutely rubbish as they have been since 2007. Faced with these developments, Carney should have been resolutely Keynesian – as the facts changed, changing his mind. But instead he offered a muddled form of ‘fuzzy guidance’ – essentially, a promise that rates will stay low for some time, but without much meaningful explanation. Carney’s communication skills – one polished Treasury Committee hearing aside – have been proven as average, rather than great. More worryingly, to some former BoE employees the shift from forward to fuzzy guidance had uncomfortable echoes of Mervyn’s tendency to ‘move the goalposts’ when he was losing an analytical debate. 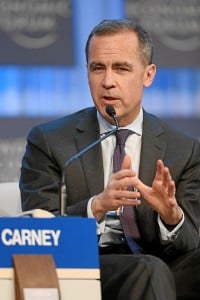 Another big problem is that Carney is too political. As Osborne’s man, he made noises about independence when appointed, to try to assuage these concerns. But since then his decisions have largely followed the Chancellor’s script. This is particularly obvious in terms of financial stability. No serious economist believes that the ‘Help to Buy’ scheme has had a big impact in terms of boosting housing supply; but plenty believe it has stoked demand. With London prices already having survived the crisis relatively unmolested, there is now a clear consensus that we have a housing bubble. The Bank of England could do something about this very quickly, by imposing restrictions on high-value lending, or forcing banks to hold extra capital. But instead Carney has chosen to sit on his hands. By covertly endorsing the Chancellor’s nakedly political scheme – vote for us, house prices are going up! – Carney has not only thrown the independence of the bank into serious dispute; he is also deliberately allowing substantial risks to re-emerge in the financial sector.

This record on monetary and financial policy – the Bank’s twin pillars – is very poor. On reforming the Old Lady, there have been some more encouraging signs, with new Deputy Governors who will hopefully shake things up. But from what I have heard from current BoE staffers, Carney’s affable manner is not as deep as first thought; in some instances, he has behaved very much as Mervyn did, testily overruling objections to his ideas.

All told, Carney’s first-year report card is shaping up to be pretty poor. He still has time to turn things around over the rest of his five-year term. But right now, a growing number of people in the City are worried that Carney was the wrong man for the Old Lady.