Today’s data from the ONS confirmed what many economists predicted, and probably what most people feared. The UK economy shrank during the final three months of 2012, raising the prospect of a triple-dip recession. The current downturn was already worse than the Great Depression, in terms of the impact on UK national income. But the spectre of another lurch into recession confirms what many people have said for some time: the Government has got economic policy badly wrong.

There are signs that even the Lib Dems are starting to wake up to this. Even at the start of the cutting programme, in 2010, the Office for Budget Responsibility noted that cutting capital spending, in particular, would have by far the biggest multiplier in terms of hitting growth. Nick Clegg only just seems to have woken up to this, judging from his recent media appearances. But no one should have been surprised that cutting the deficit hit economic activity.

Fundamentally, the deficit hawks got the economics wrong. A large deficit cannot be sustained indefinitely, of course, but in the absence of positive knock-on effects from cutting it, it is generally best to wait for growth to take hold before really grasping the nettle. And those positive knock-on effects have not materialised. For all of Osborne’s talk about ‘hard-won credibility’, the facts simply don’t back him up. UK gilt yields – the market interest rates he cherishes – started to fall in April 2010, before the May election, and when everyone was expecting a coalition (despite Tory claims at the time that a hung parliament would lead to disaster). The market made up its mind about the UK before Osborne even got the keys to Number 11 Downing Street. 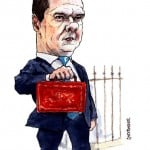 The story since then has been much the same – the decline in UK yields has tracked falls globally elsewhere, and the Bank of England’s decision to buy up a third of the UK’s debt stock also helped. Fundamentally, the UK’s austerity programme has not been the key factor behind the UK’s low market interest rates. Furthermore, keeping long-term yields low is not a growth strategy. The link between long-term interest rates and activity in the UK is far looser than deficit hawks like to suggest – ‘real world’ interest rates, that households and small businesses have to pay banks, have not moved in line with gilt yields. The IMF has been gently warning the UK for some time that it needs a ‘Plan B’ in case things went wrong; in the past week, its Chief Economist Olivier Blanchard was as blunt as he could be, telling Osborne to tone down the austerity programme. Investors are now shunning the UK because it is not growing, and the AAA credit rating could vanish all too soon.

The Coalition Government rightly made getting the economy back on track its main purpose. But it has definitively failed. The Opposition may not have done much better – but the claim that the Con Dems cut ‘too far, too fast’ was, with the benefit of hindsight, absolutely right.

The UK needs a change of direction. Cameron’s loyalty to his friend Osborne will probably save him from the chop; the ties that bind these two together are clear for all to see. But, if Osborne is a man of honour, he must face up to the fact that he has failed. He went against the advice of a broad spectrum of independent economists, and listened instead to those who did not understand the role of fiscal policy in a depressed economy. If George is an honourable man, he must resign. It is time for someone else to take a new approach.