Is Greece about to leave the Eurozone?

How many times have we heard from the Eurozone political classes that the EZ is welded together to never be torn asunder? Whatever the hard headed economists and financiers would tell them political will can overcome all became the mantra.

All the while the mere thought of a country leaving the Eurozone, let alone a full blown break up, has been sneered at by those that spend all our money to keep it afloat.

But in the process this has brought untold misery and civil unrest across the region as austerity has been forced on those countries that were welcomed in but cannot fit in with the Eurozone economic requirements.

As Nigel Farage pointed out last week, Greece for example has been subjected to ‘diplomacy at gunpoint’. He went on to say ‘It’s the kind of strategy that Palmerston used against Athens back in the 19th century. Nobody can deny today that Greece is anything more than a colony’.

But in a twist the Vice President of the European Commission, Neelie Kroes, has come out and said in a Dutch newspaper today that there would be no disaster if Greece left the Eurozone.

There would be ‘absolutely no man overboard’ if Greece left she said to De Volkskrant "It's always said: if you let one nation go, or ask one to leave, the entire structure will collapse. But that is just not true." This raised the thought that there may be preparations afoot to eject Greece from the EZ. 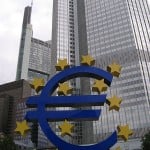 Pointing to the lack of progress within Greece to get on with the required austerity drive she said "This is why the troika is back in Greece again, reporting for the umpteenth time that Greece is not living up to its promises: too few savings, too few reforms."

This was echoed by the Dutch Prime Minister, Mark Rutte, saying on radio that if Greece left the EZ now it would pose less of a risk than it did when the risk first surfaced.

"There is less risk now," He said. "It is in our interest that Greece remain and to achieve that it must do all it has promised to do but if that does not work out, then we are stronger now than a year and a half ago."

And all this with the backdrop of Greek public sector strikes against the austerity drive; the police using tear gas to control the crowds and their government forcing more job losses on the public sector.

"The Greeks have to realise that we Dutch and we Germans can only sell emergency Greek aid to our taxpayers if there's evidence of good will." Said Mrs Kroes.

So the message now seems to be that Greece can and will remain the Eurozone ……. as long as it meets its obligations.

But those obligations rely on its people accepting an austerity they patently do not want to bear.

Regulated buy-to-let: an unexpected casualty of the Mortgage Market Review