Is HMRC on the mend as staff morale turns corner?

Bloomsbury Professional says that HMRC staff surveyed in 2012 are increasingly positive about the organisation’s direction and management (see graph).

Martin Casimir, Managing Director at Bloomsbury Professional, says: “HMRC morale has been at record lows over the last few years, so it is encouraging to see that things are starting to turn a corner.”

“Staff morale is still low when compared to other major organisations, and HMRC is starting from a low base, but the momentum towards improvement is there. Staff are now happier with the organisation’s leadership and direction than they have been for a long time.”

Bloomsbury Professional adds that despite cuts to HMRC’s budget, HMRC staff are increasingly happy with their workloads. 62% of staff said their workload was acceptable in 2012, compared to 54% in 2010.

Martin Casimir says: “Staff happiness with workloads might suggest HMRC has been managing the effect of budget cuts on its staff better than expected. However, it’s important that heavier workloads do not mean a lower level of service for taxpayers. HMRC should make sure it finds ways to do more with less for its customers.”

Bloomsbury Professional says that improvements in HMRC staff morale are important as they should lead to a better quality of service for taxpayers and accountants.

Martin Casimir says: “Hopefully, the internal signs of improvement will filter through into a better experience for the taxpayers and accountants that rely on an efficient and customer-focused HMRC.”

“Improved morale should also lead to better levels of staff retention and more experienced HMRC staff. One of businesses’ and accountants’ biggest complaints about HMRC recently has been its failure to adequately replace the experienced and knowledgeable staff that have left the organisation.”

Other findings from the HMRC staff surveys include: 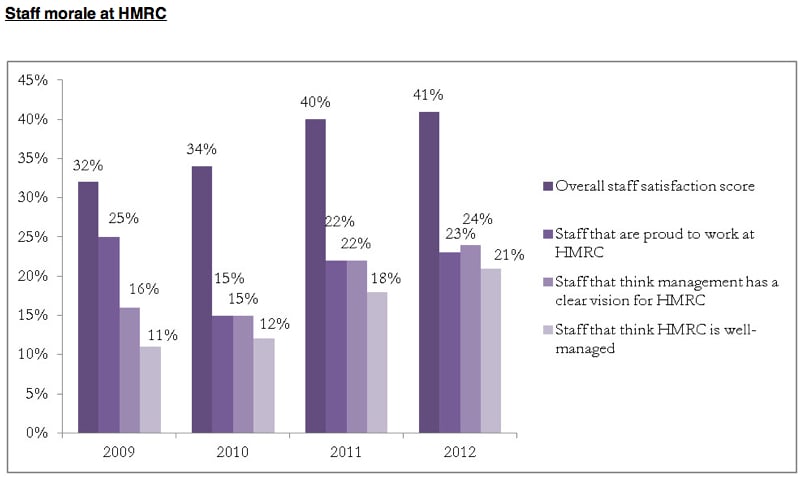 Government needs to put stability ahead of headlines