Today’s GDP data brought some ‘good’ news for the beleaguered residents of the UK: the economy managed to grow by 0.6% between April and June of this year. That was the strongest pace of growth since the third quarter of 2012, which in turn was driven by odd factors like the extra Bank Holiday and the statistical treatment of Olympic ticket sales. Abstracting from these funnies, the last time growth was stronger was three years ago, at the time of the 2010 election.

It is somewhat depressing that these data will probably be hailed as ‘good’ by so many people. Yes, it is nice that the economy is growing, and especially so given that all major sectors contributed to growth. But let’s please have a little context.

First, 0.6% growth is not strong – it is normal. That is basically the average pace that the UK has grown at for at least the past 160 years. To describe it as ‘strong’ only indicates the scale of the disaster we’ve seen over the past three years.

Second, even after today’s figures, we still have a long way to go. The economy is still more than 3% smaller than it was at the start of 2008, and around 15% below its pre-crisis trend. The financial crisis, and subsequently austerity, have left lasting scars on national income and we are all worse off as a result and probably will be forever. In particular, compared with official forecasts from 2010, recent research from the University of California suggests that around 60% of the UK’s recent malaise is due to austerity, not the euro crisis or other factors. Mr Osborne, take a bow. Despite that, the Chancellor is relishing the prospect of even more spending cuts after the election.

The right interpretation for today’s data is cautious optimism at best. Unlike past spurts of growth, which have felt all too shaky, there is a growing sense that the UK may avoid lurching backwards this time around. The US is currently going through a soft patch associated with fiscal austerity – but that should ease by the end of this year, and private sector growth there looks increasingly robust. There has even been some better news from Europe recently, suggesting the economy there might just turn the corner before the end of the year. But downside risks clearly remain – in particular, the recent fall in households’ saving looks a bit troubling. We are not out of the woods yet.

The economy may finally now be genuinely mending. But policymakers should still be ashamed of their performance over the past three years. We should not easily forgive or forget that. 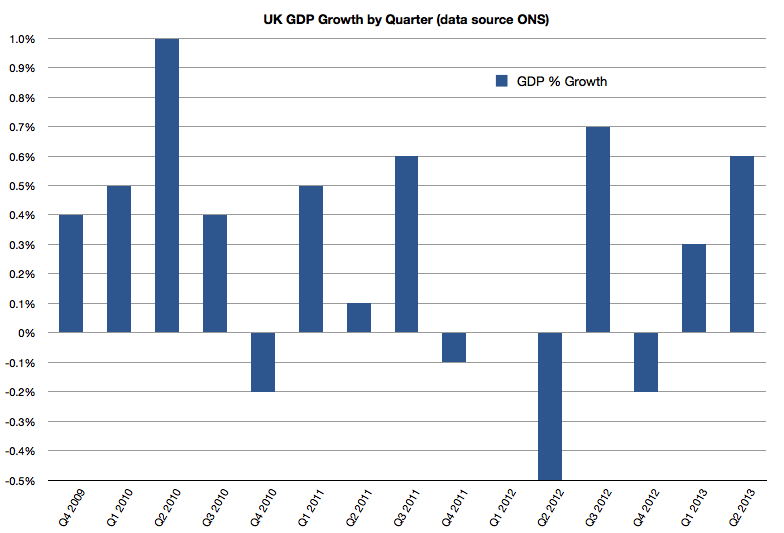